Prep and launch - Overkill is afloat !

It has been an up and down couple of months, as you will realise from the time since the last post.  My camera is on the boat, so there will be another post shortly to fill in some details.

But I have launched................... this was taken as we headed off up to the mouth of the Brisbane River to the marina after tying up to the pontoon for engine checks after launch, a beer and photos.

The last few months have been tied up in getting the engine systems installed: fuel lines and filter, water exhaust install, anti-syphon loop, the cutlass bearings (front and rear) in the stern tube and the shaft seal on the inside of the cabin.  There was also a single through-hull installed which was fitted with water strainer high above the waterline so you can empty the strainer easily.  In addition, the folding prop was fabricated and fitted, along with sacrificial zincs on the driveshaft and another one on the keel attached to the stainless steel bottom rudder fitting.

I fitted a mainsail track and block, turning blocks for the running backstays with clutches and a block to hold down the boom (Cunningham?).  I was tying on the mainsail, lashing it to the boom and gaff but it was too windy to raise it enough to lash it to the mast so it was tied down.  I finished the instruments by mounting the transom transducer for the depth sounder on the Raymarine Element 7 plotter.

Inside I hooked up the engine power and my father and I filled the oil in accordance with the Beta manual and filled the coolant in the heat exchanger.  After putting 40litres of diesel into the take (60l capacity) we bled the engine using the fitted hand bleed pump on the engine until we had diesel ready to go.  The engine bloke said to give the impeller a bit of lubricant as it would be running dry during the first startup until the water got through.

Outside we taped up a boot stripe above the waterline (this was before the final fitting of the shaft and prop) and in some of the hottest weather in Brisbane for a while we suited up and painted on the antifoul.

Below shows us when we got to the last section: 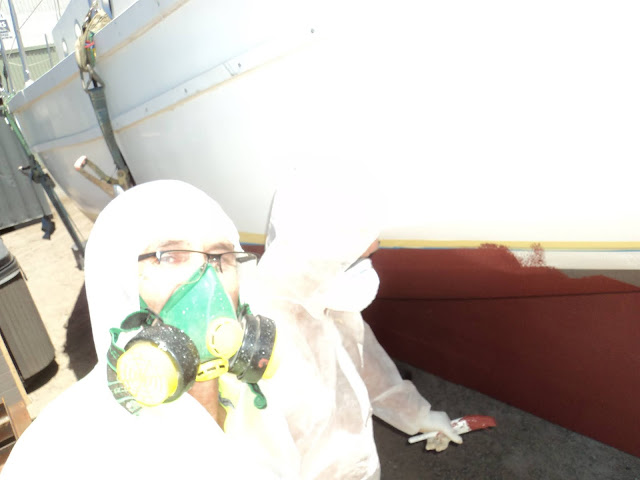 And below from further away, Dad on the roller: 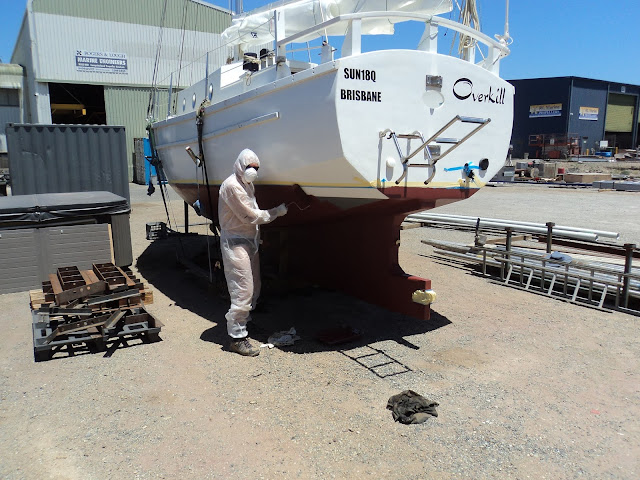 This is finished from the aft starboard quarter: 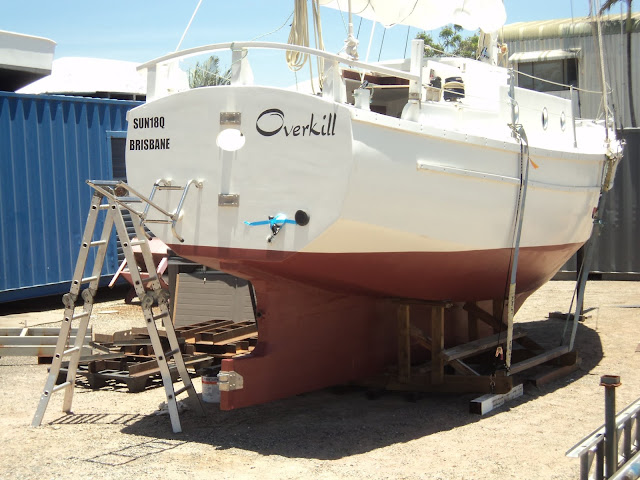 Once we were ready we had to wait for a slot with the travel lift.  I was in a commercial marine precinct and I was definitely out of place.  So much so they had to use the "small" travel lift which takes up to 65tonne to move it around close to the "middle" travel lift (300t capacity) which could walk it out over the water and lower.

This is waiting for the lift: 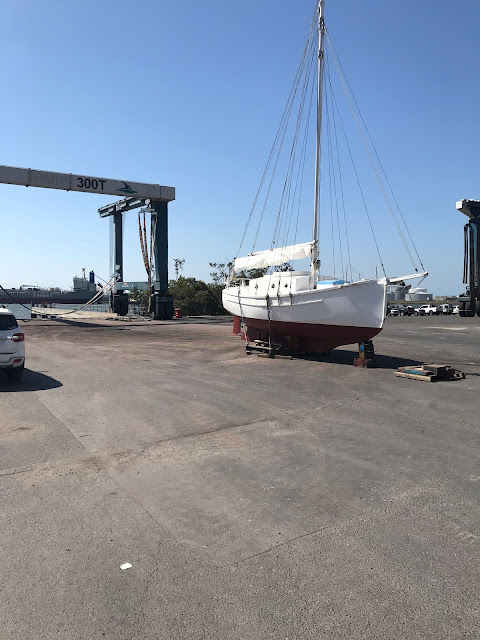 And the "middle" 300t lift moving past to lift due to mast height: 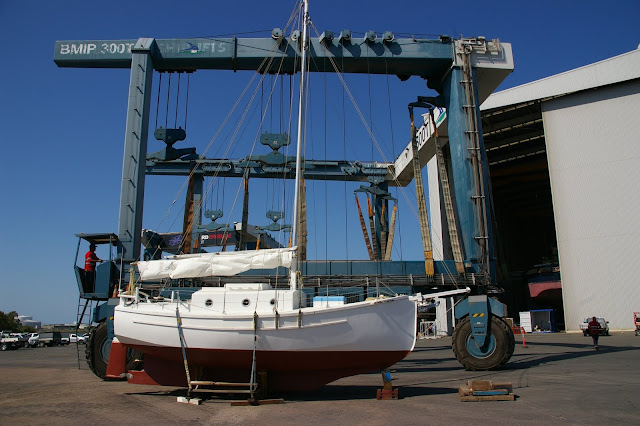 Once it was in position and the slings in place it was lifted off the cradle: 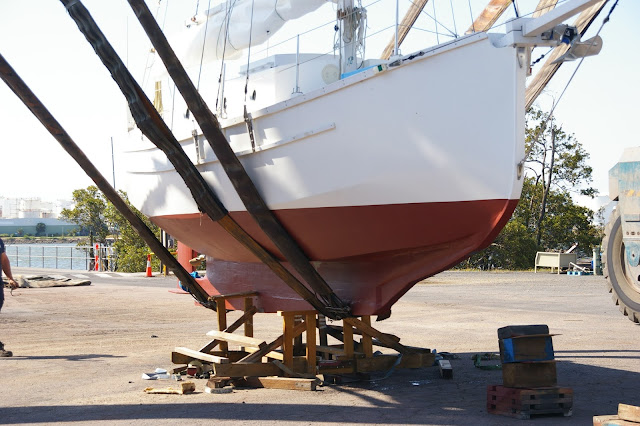 And I could quickly antifoul the bits that we had missed because of it.  This could dry while we moved the cradle out of the way and packed our stuff into the car which my mother was moving out of the yard once we launched: 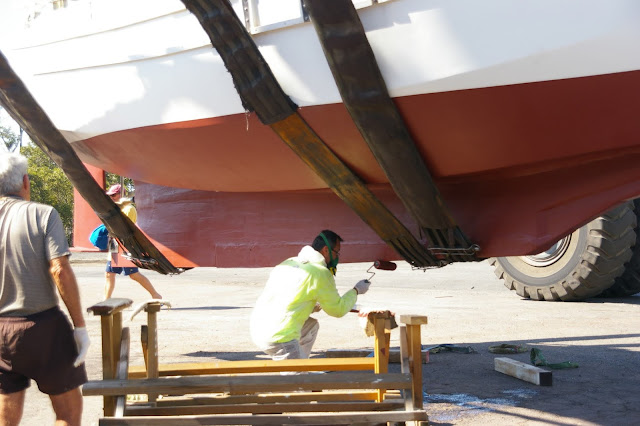 You will have to wait for the launch video sorry (mum took lots of videos and I need to pick a section out) but once ready my father and I, and a mate with lots of experience to captain were lifted up into the cockpit by forklift and we moved back out over the river to be lowered in.  The boat was too light to register on their weight gauge.

They lowered us very slowly down into the water and while still on the slings I jumped down into the cabin, turned on the power system including the engine circuit and opened the seacock.  Dad was on hand as always with the spanners in case he needed to bleed the air out of the lines, but after a couple of cranks with the key the engine fired up straight away.  I am impressed with how quiet it is, and I have yet to fully put the engine box around it.

A quick check for leaks and after finding none we were into reverse and out of the slings while a very impatient large motor catamaran stood off close by to be hauled out.  We motored a short distance to the pontoon and shut down after tying up to check the fluid levels and check again for leaks. 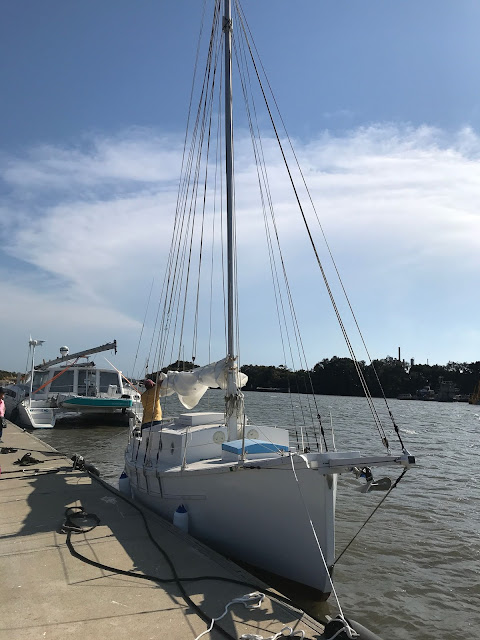 Mum took a couple of photos, we moved some tools and things we didn't need off the boat and I poured some beer into the river as an offering, christened the boat by pouring some over the anchor and had a little smile.

Dad jumped off to transport cars around to the marina and my mate and I were off up the river to the mouth and across Moreton Bay while we still had daylight.  The weather was rubbish with wind against tide and 1.5-2m swells on the beam in the bay but I didn't care.

We tied up at the marina a couple of hours later after motoring and I had to rush off for work the next morning.  Since then I have been tinkering around, but still have a few blocks, leads and clutches to sort before I can put all the sails up.

I will take a few photos of the fit out etc and some sailing shots.  I was impressed on the initial motor over with how dry the cockpit was considering the sea, how little we were rolling and how safe it felt.  Engine-wise we were making five knots in the river against the tide at about 2500-2750 RPM of a recommended max of 3400 on the 14HP Beta.

But I have launched, after nearly eight and a half years (but take off a year and a half for working away) of what was planned to be ten at the most.

Thanks to my family and father for the assistance along the way, and for tolerating my continual requests for 10 minutes help in the shed.  They coined the term "shed time" for a 10 minute request for help that inevitably took half to three-quarters of an hour.......

Thanks also to John Welsford for the design and help along the way with email inquiries, along with the Woodenboat Forum where I shamelessly stole ideas and tried to copy them.