The front cabin is all but done.  A few touch ups with paint and fitting of the PVC pipe from the deck into the chain locker still to go but all other pieces in place.

Below are the starboard side doors in place: 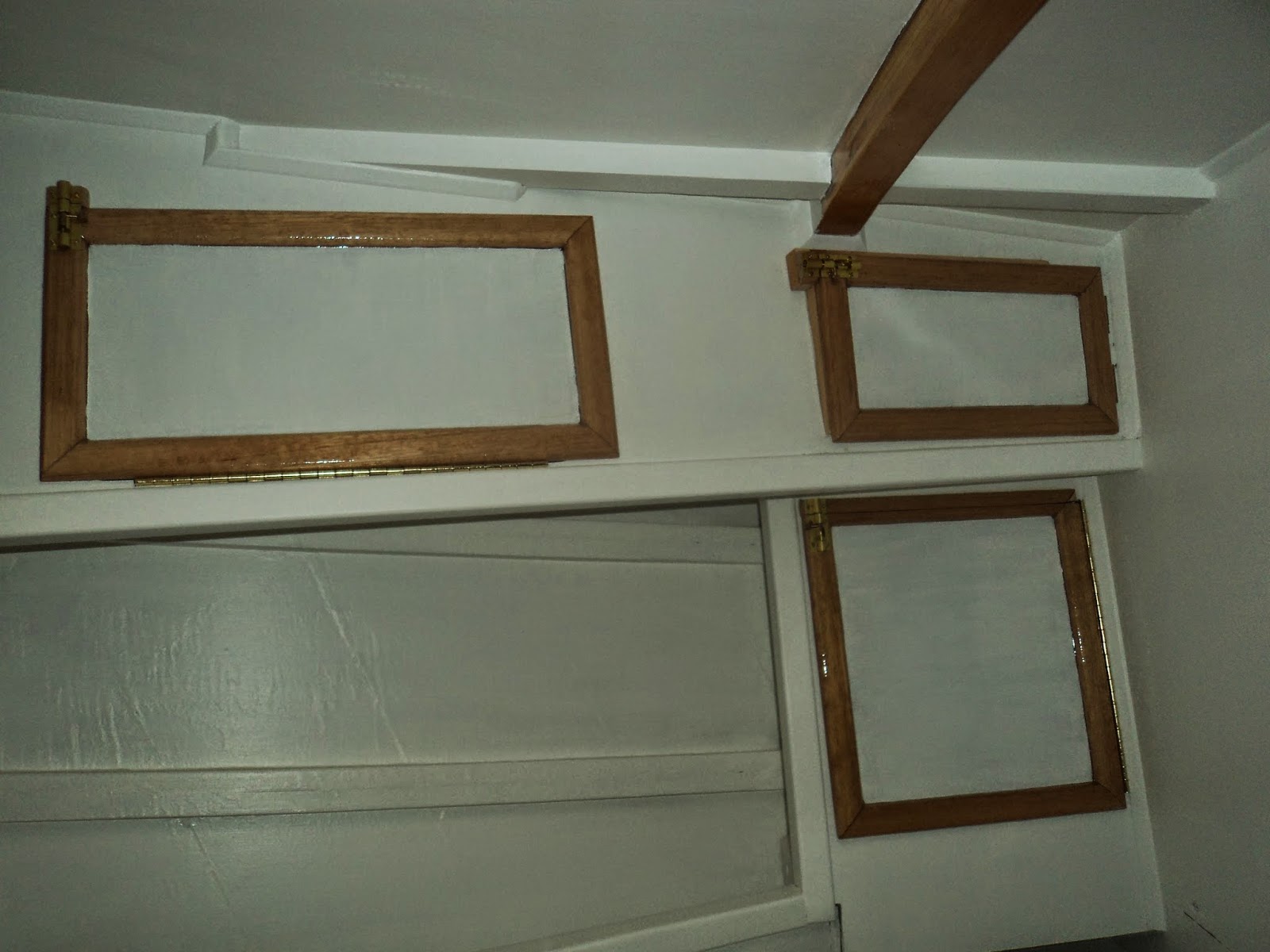 And open.  Lesson learnt, don't bend the front face of the overhead lockers just because the ply is flexible.  Make the front face straight, it will be much easier to get the doors to fit.  There is enough flex on the two bigger doors, but the top right one I had to put in spacers for it to close against.  Yet to paint them white which will make them disappear into the background. 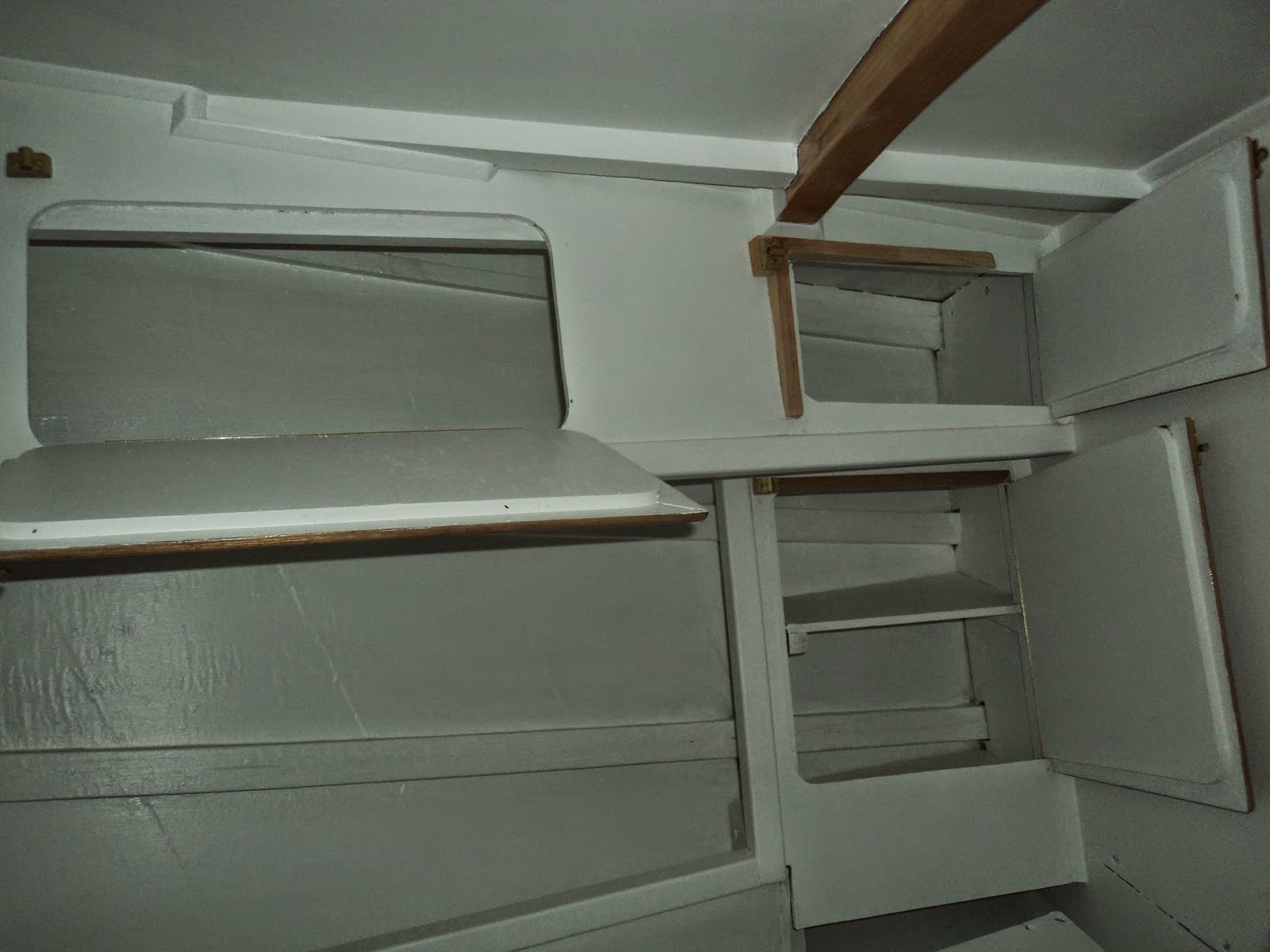 The hinged berths in place, after a little bit of adjustment.  The theory is that you can access the storage underneath easily, but I should get some ventilation under the mattresses to allow them to breath: 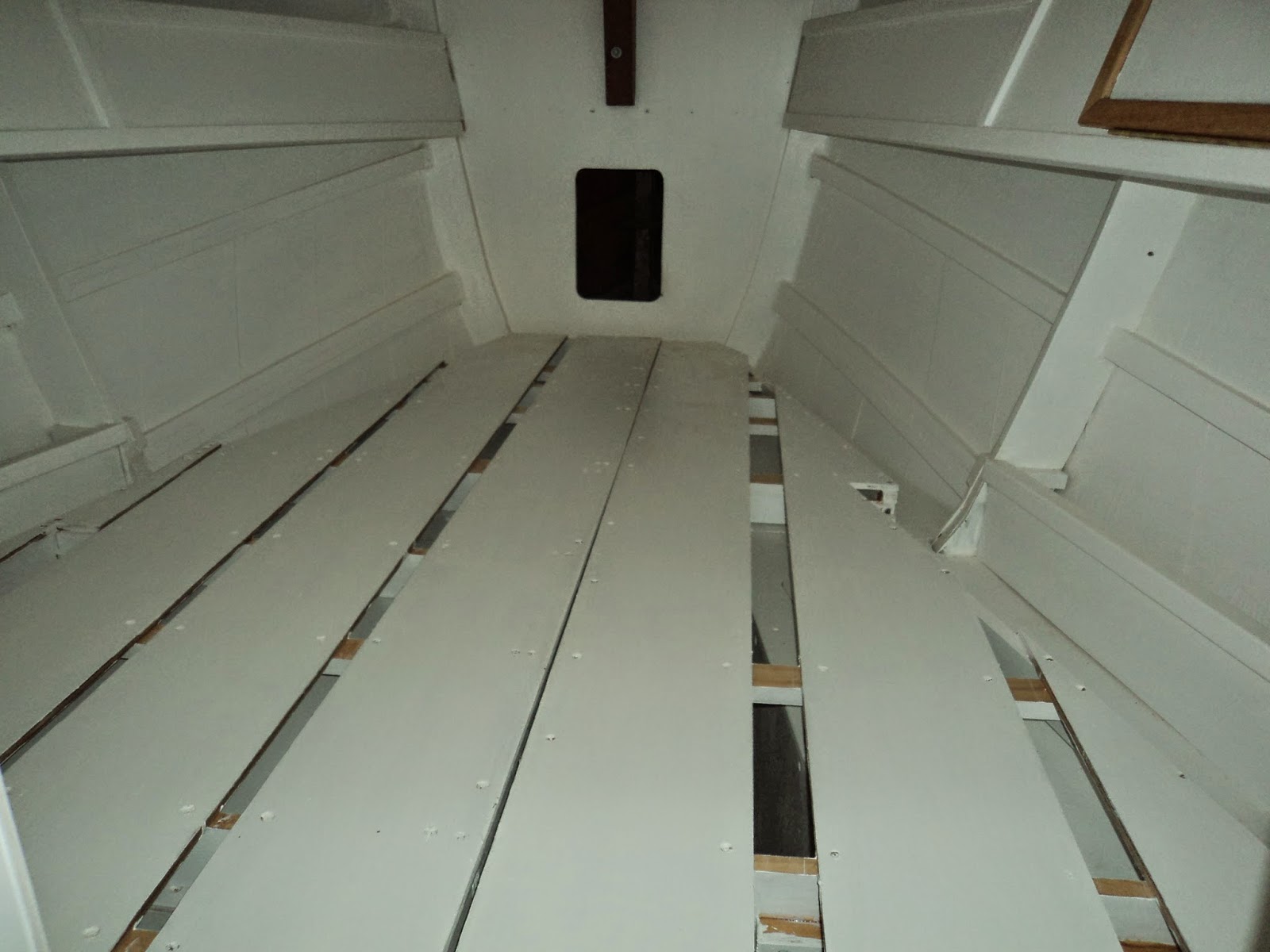 And open on stb side: 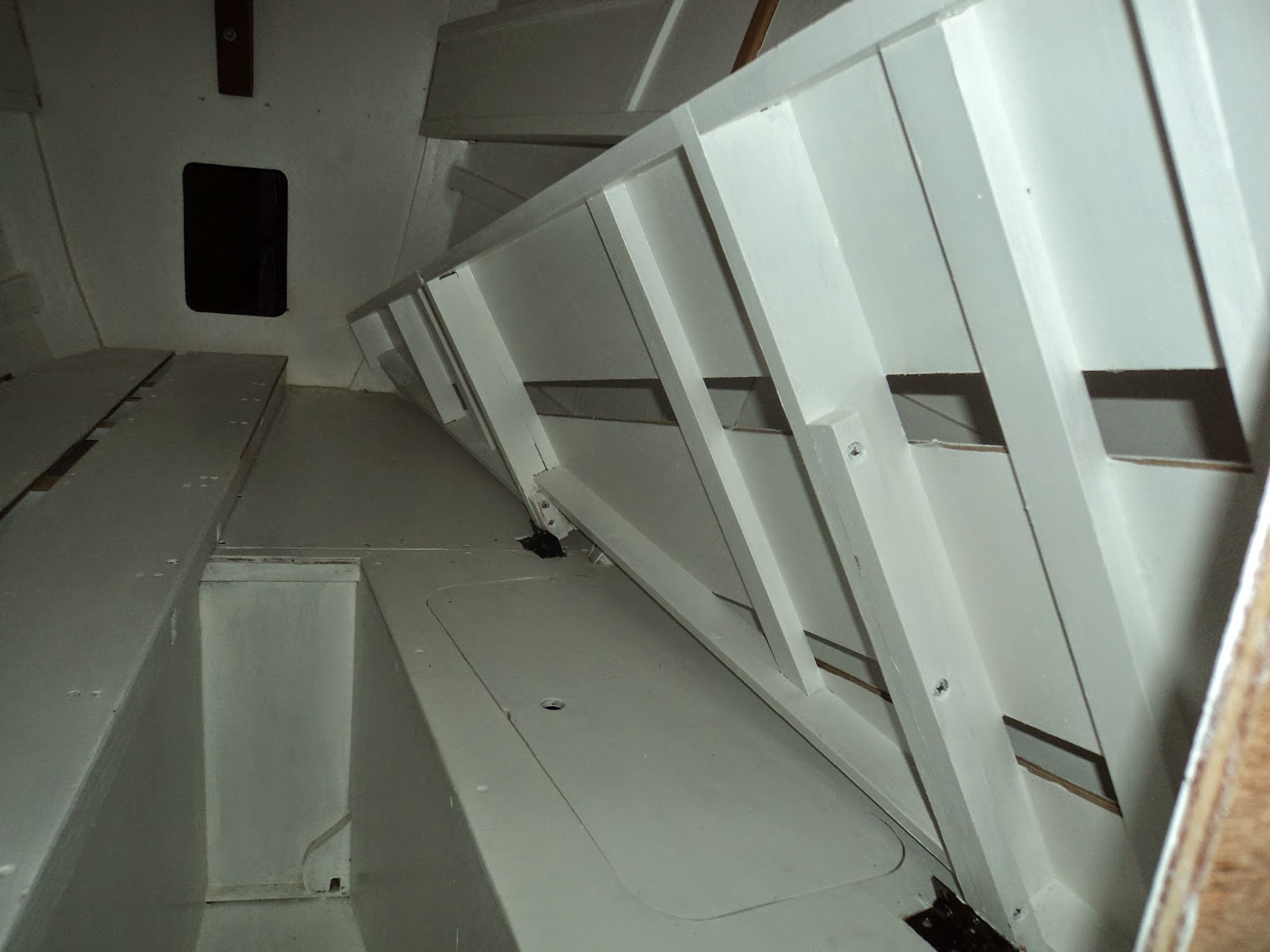 Open on the port side, white access hatch forward is into the chain locker: 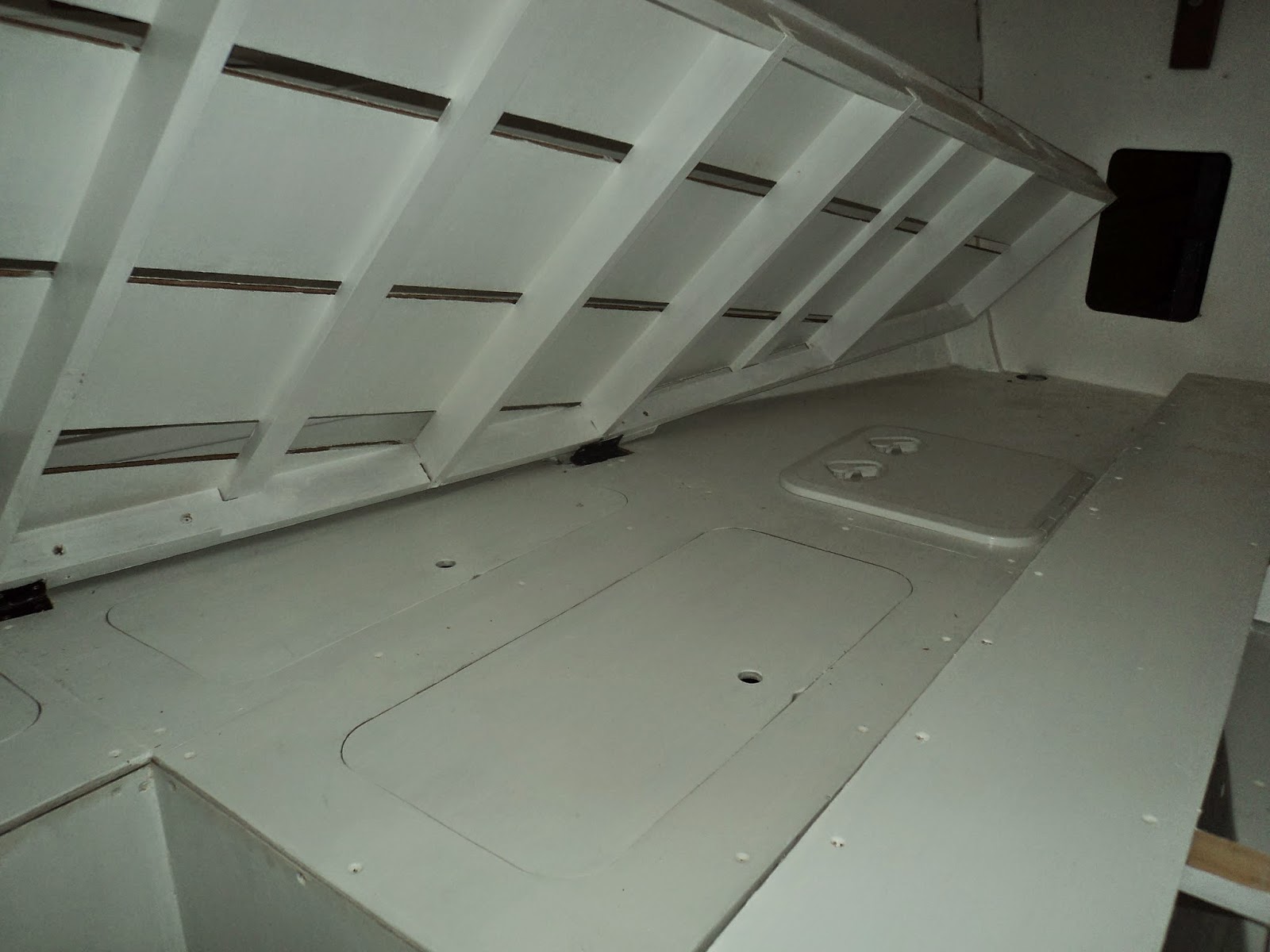 The 12mm front of the cabin also forms the rear of the deck storage boxes and air vents.  Below is waiting for epoxying together and then final placement.  The darker curved beam goes on the top and will have the cabin top attached to it, the lighter one is hardwood for the bottom, rectangles are 12mm doublers which go inside and out in the middle.  You can see the holes cut for the screw out ports that are the inside of the vents.  More on them later. 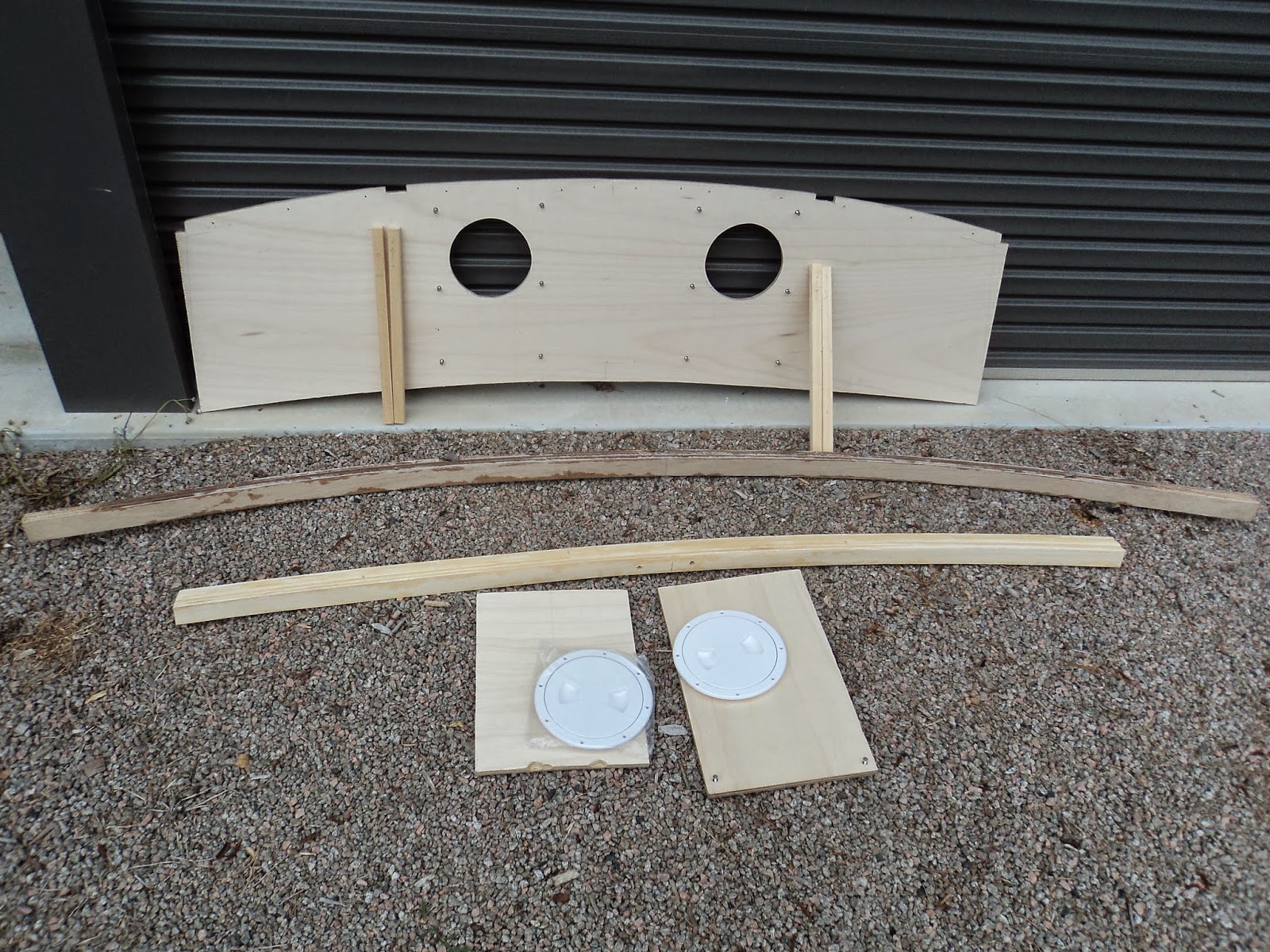 Before shot with the aft of the galley showing. 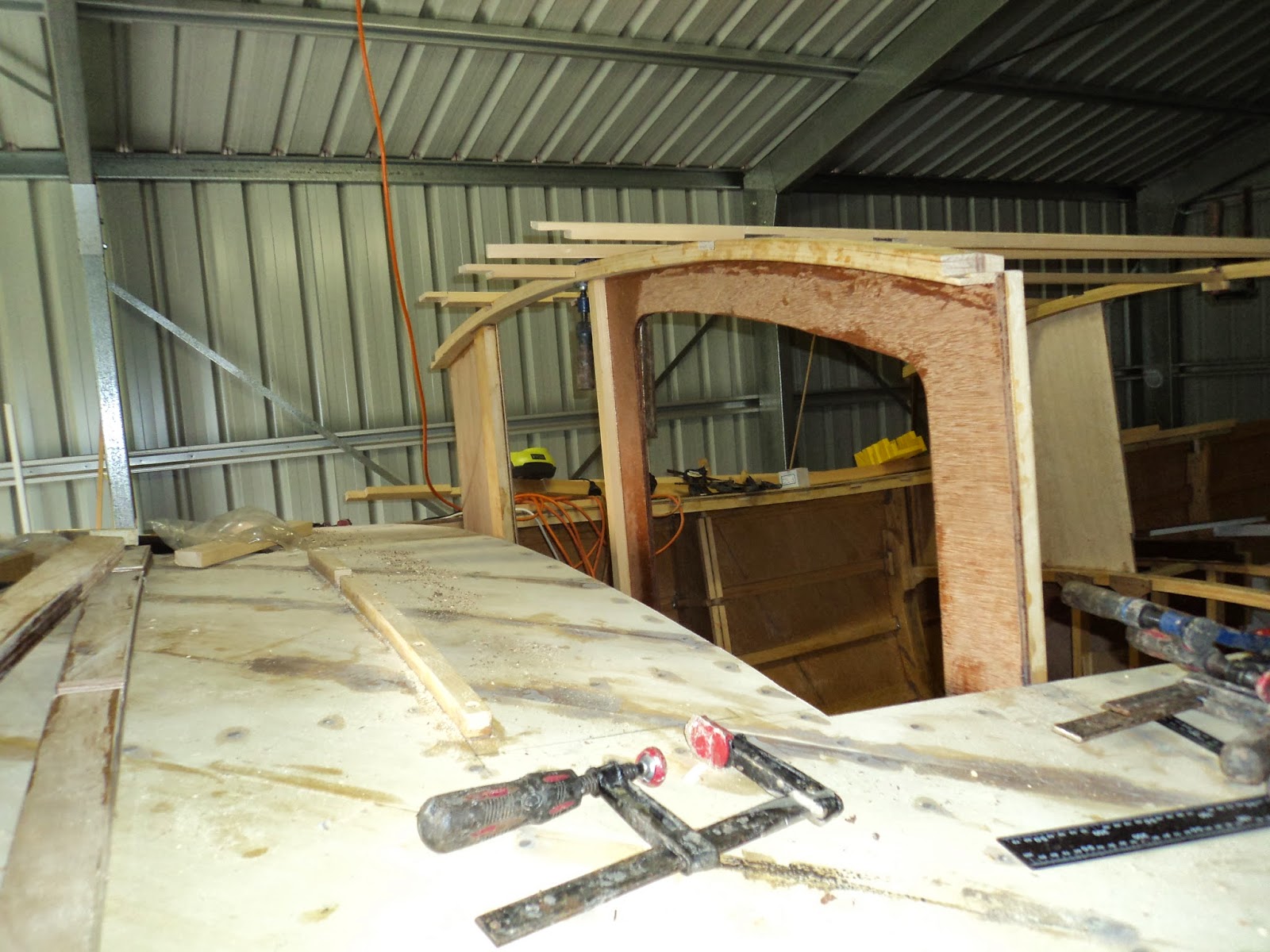 And in place, you can just make out the hardwood bottom beam on the inside of the 12mm ply.  The Uprights on the front, with the 12mm doubler between them are to support the side of the vents and also the edge of the deck box. 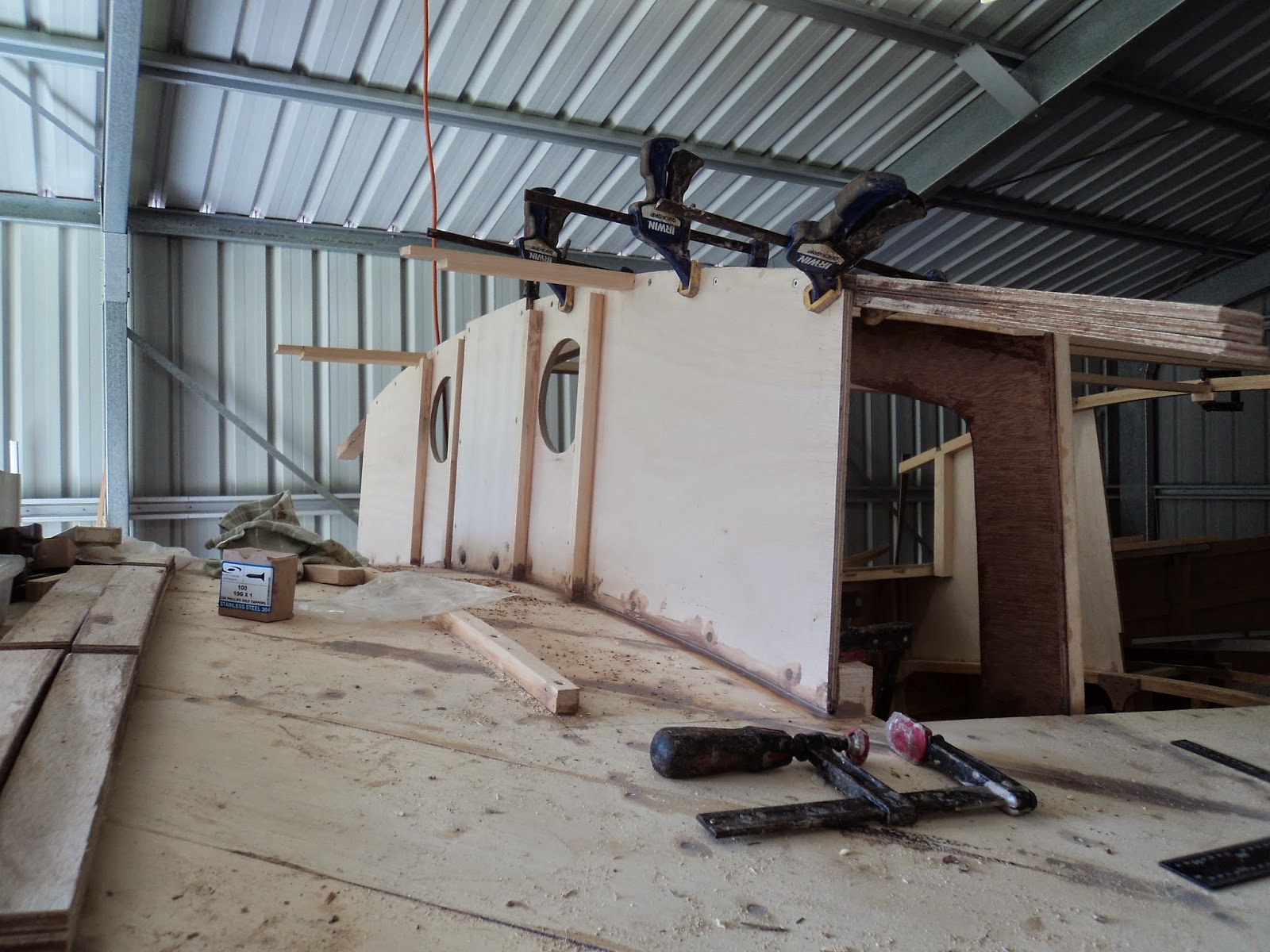 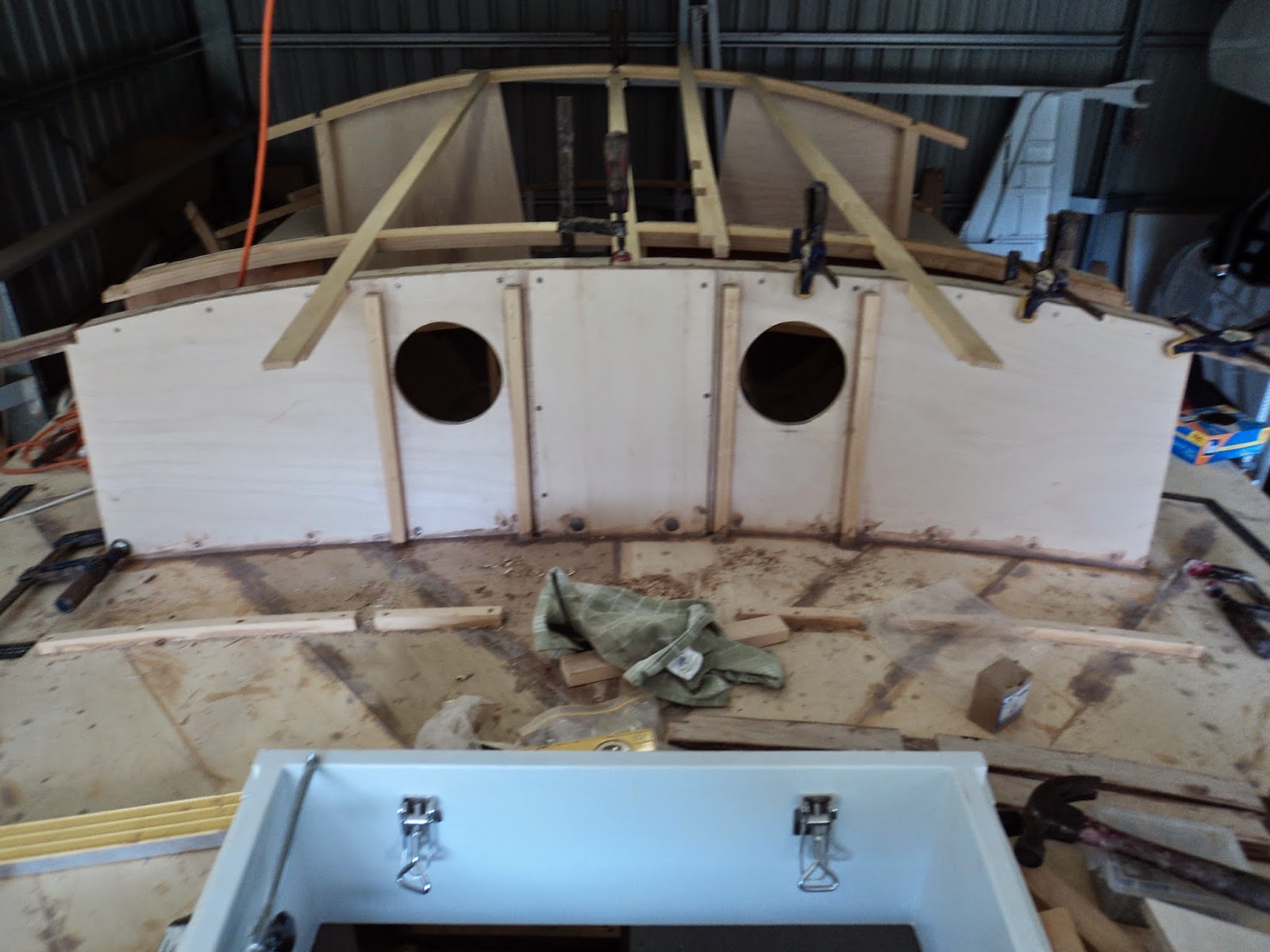 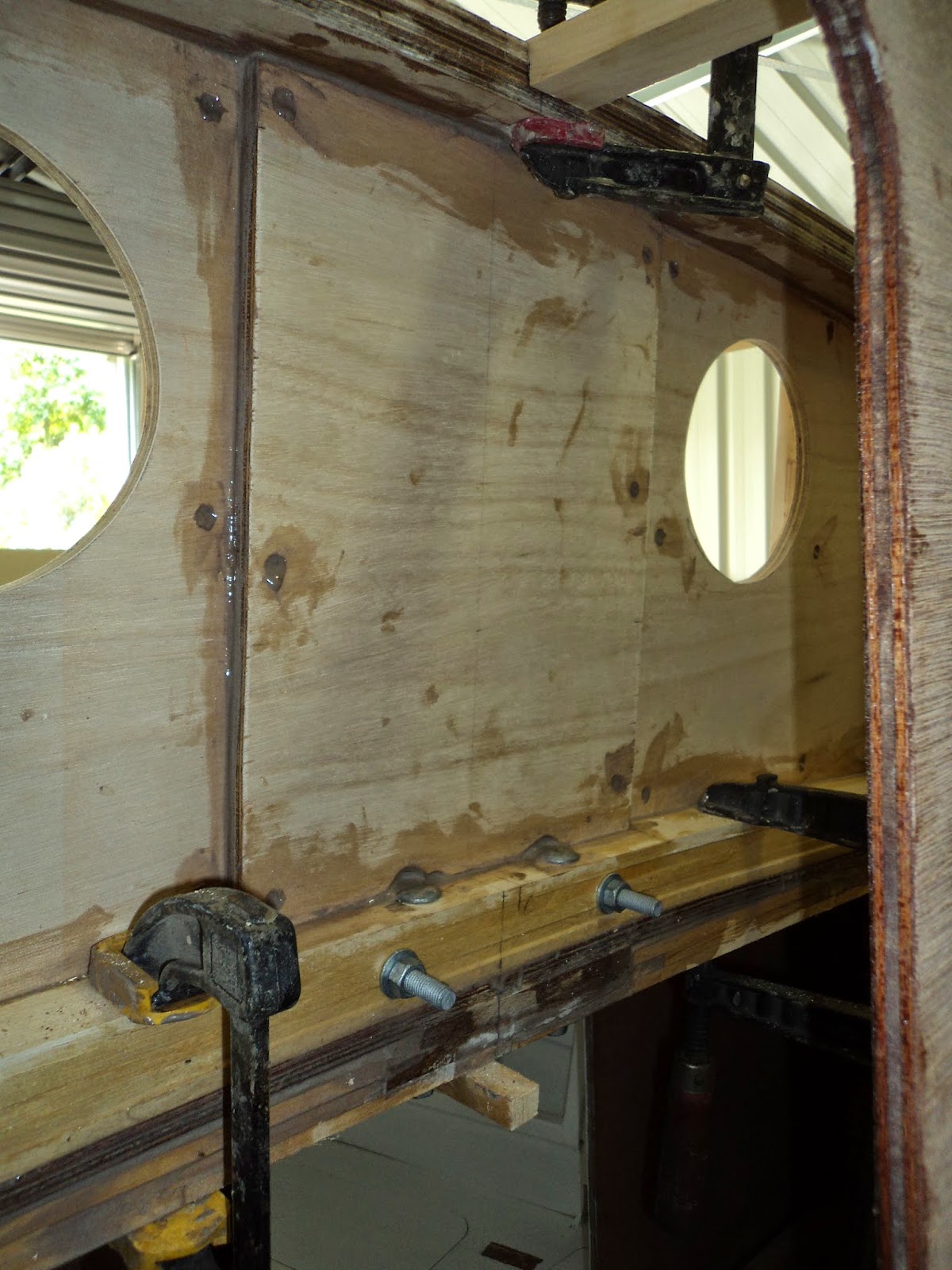 Below are the interiors of the vents with two coats of epoxy to protect them from moisture.  Imagine you are looking from the side at the interior of the vent.  Air will come in on the right hand side near the top edge via a screw out port where it will strike the first ply forcing it down around the bottom striking the second ply.  This will force air upwards where it moves around the top and out on the top left into the cabin through the inside screw in vent.  Drain holes at the bottom will allow any water to drain into the deck box beside it and from there out of the side onto the deck.  Photo in place in the next update. 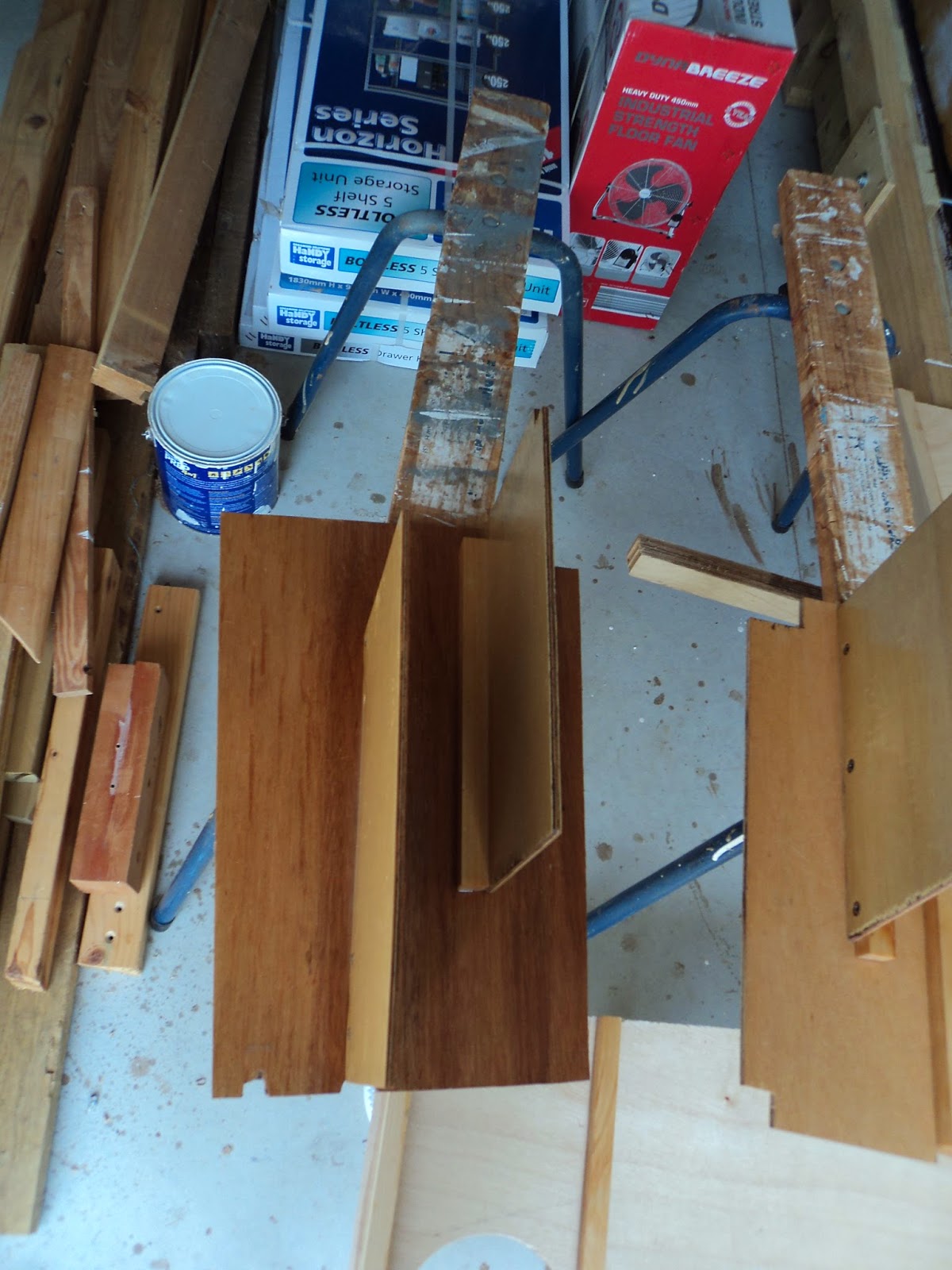 I have dry fit the front of the deck boxes, lap joined in the cabin roof supports and permanently attached them.  I have also now added vertical supports both sides on each end of the cabin to screw the sides into (not shown). 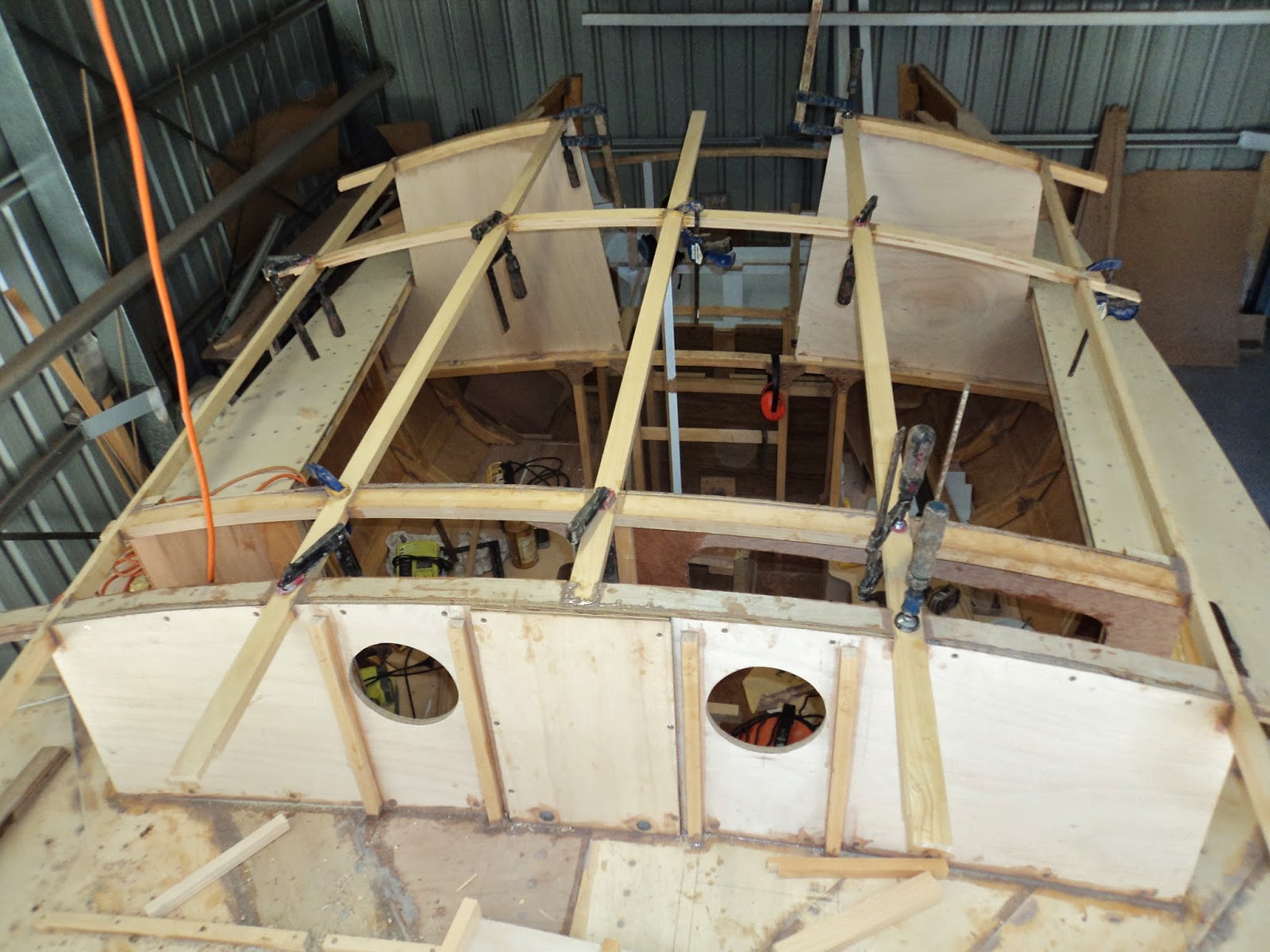 I've started on the overhead storage in the main cabin, this is the stb side with most of the shelving cut to shape. 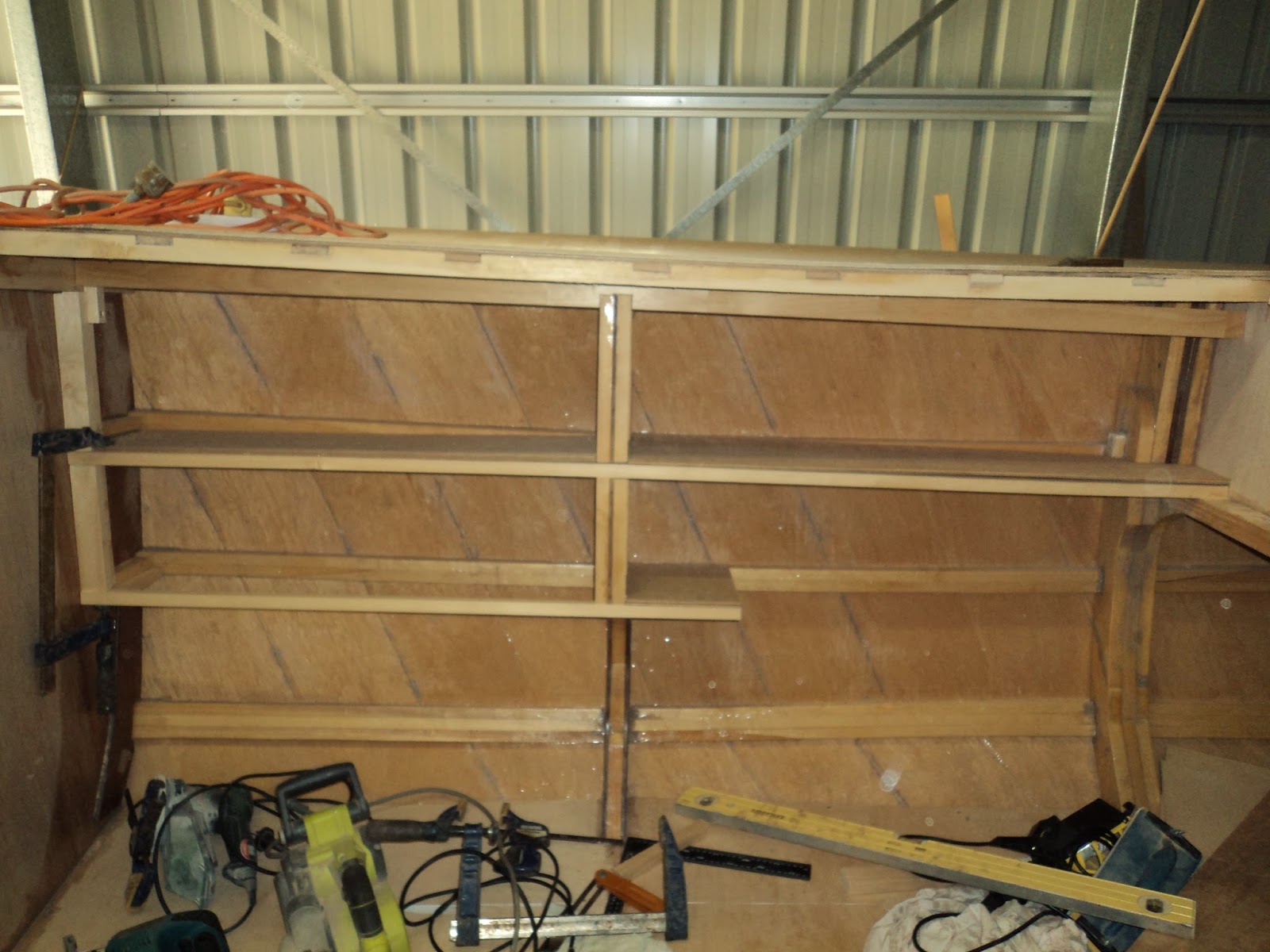 On a side note I have had someone come around to sort out the drive train, I really need to sort out the lead keel and get it in place ASAP.  That could be a bit scary.
Posted by Sundowner at 00:29 No comments: