Merry Christmas and a Happy New Year to all.

With school holidays again upon us work in the shed has been slow.  But I do have some progress.  I figured out that to finish the seats properly I should sort out the quarter deck and seat backs.  As usual, before I can do what I was thinking I need to do five other things.

So I procrastinated and decided to finish the washboards and hatch at the same time.

First off, the side deck and seat back supports.  These are 9mm ply which will have solid wood on the leading edge to support the seat back in 9mm ply.  The seat backs also continue up above the deck to become the inside face of the combing.  They will also create storage space for long items accessible from the main cabin, I've yet to cut the access through. 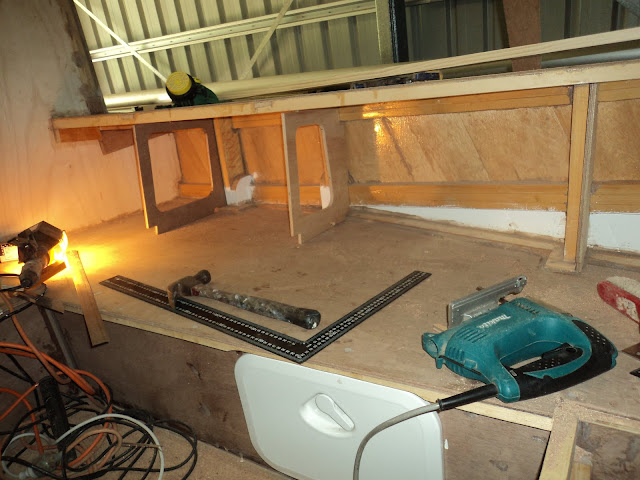 And looking aft, note the notch at the front for 20mm x 20mm and the drain hole in case there is a leak somewhere so I will hopefully see the water. 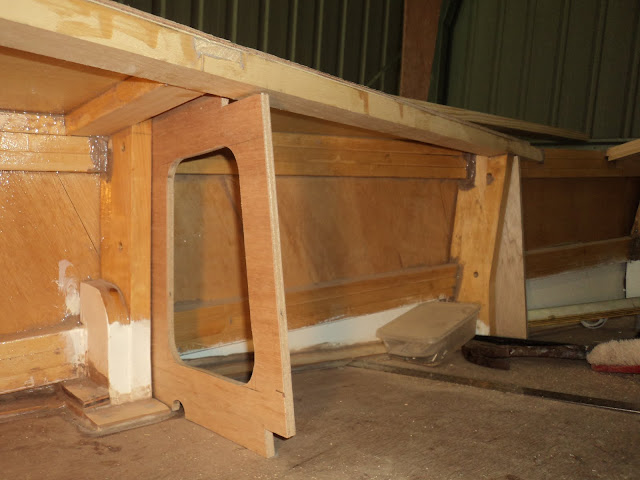 Once I had cut both sides I epoxied them in place, they are epoxied to the frames (upright bit) and the under deck supports, and have epoxy fillets both sides at the bottom where they meet the seat top. Also note the 20x20 now screwed and epoxy filleted as well at the front: 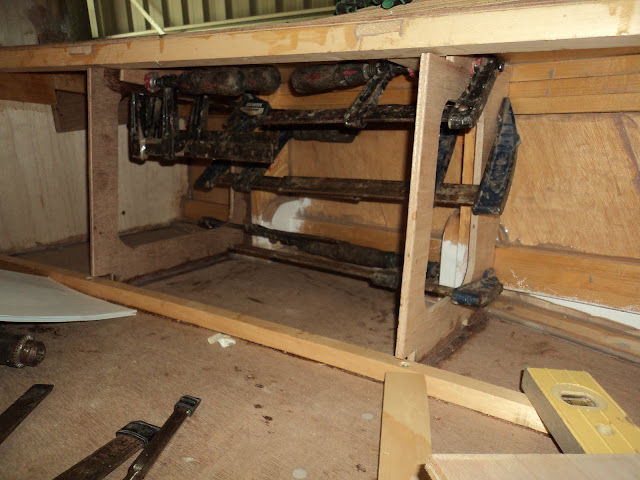 Due to clamp issues it took a few lots to get them all in place, then I epoxied the seat top and the ply leaving raw ply at the front for the solid wood seat supports yet to be attached. 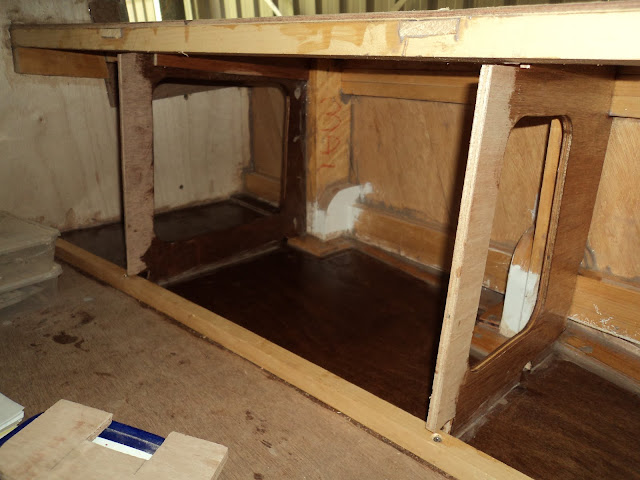 Then it was down the back for more quarter deck work.  Once the first 6mm layer was cut to shape I could mark out the cut outs for the Delilah posts. Apparently that is what smaller posts on a boat that already has a large Sampson post (the bit up the front to tie off to) are called.  Who knew? I am still shaking my head over some of these terms. 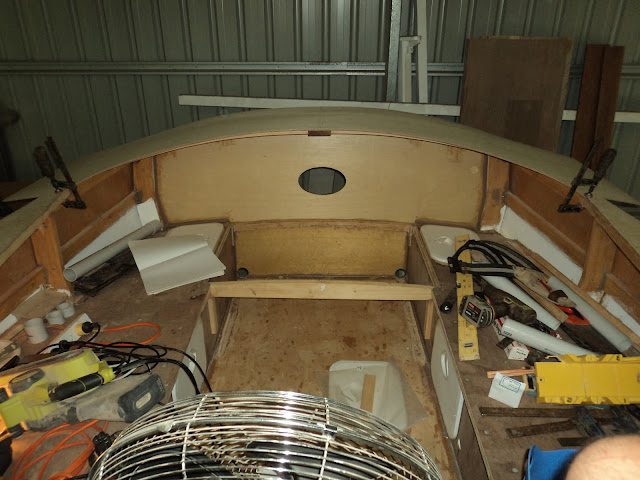 The hardwood 80mm x 60mm post notched to go over the quarter deck beam.  The post will be coach screwed through the beam, and also into each of the stringers.  It will also have a hardwood piece braced across the front face to the transom frame, and be epoxied to the deck (12mm ply).  Hopefully strong enough. 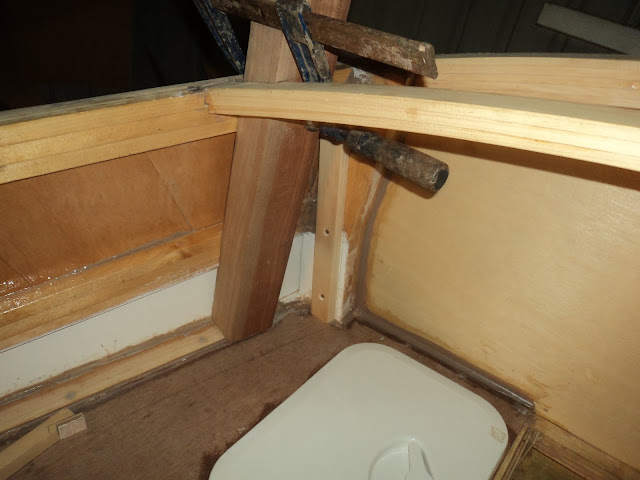 There is a 9mm ply covering piece that goes from the seat back to the transom frame so any water can work its way back and out a drain hole I will drill each side.  Below you can see the insides of them being epoxied, and also the Delilah posts. 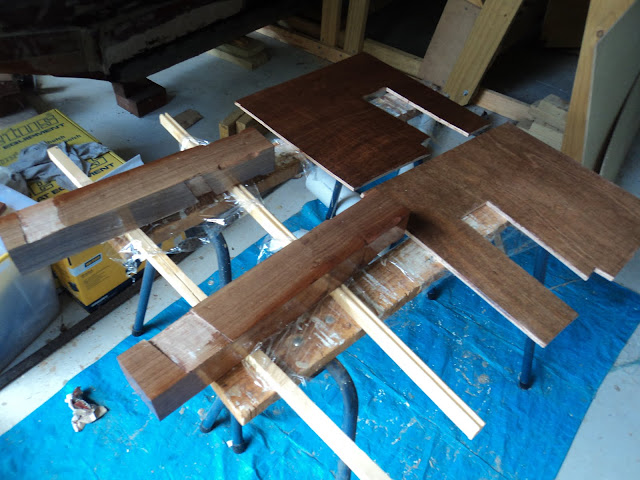 And a close up of the posts showing the rounded edges for rope.  I have yet to drill the holes for the stainless steel rod to go through each one.  The dry wood are the locations of the frame notch and also where the bottom will meet the stringers with thick epoxy glue. 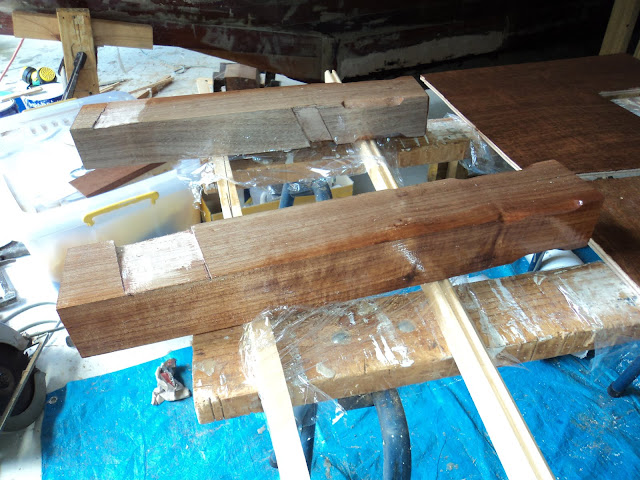 The washboards in the plans are quite large, I decided to go for a greater number of smaller ones. Don't know why, just felt it looked better to me and allows a few more options for ventilation in rain or heavy weather (not that I am close to worrying about that yet).

First I cut a 9mm ply one of each board, I used left over 200mm wide hull planking which I have almost run out of.  Nice straight edges for me to work with and no gaps when they rest on each other. Better than I could have cut!  There was another one on top, but not in the photo. 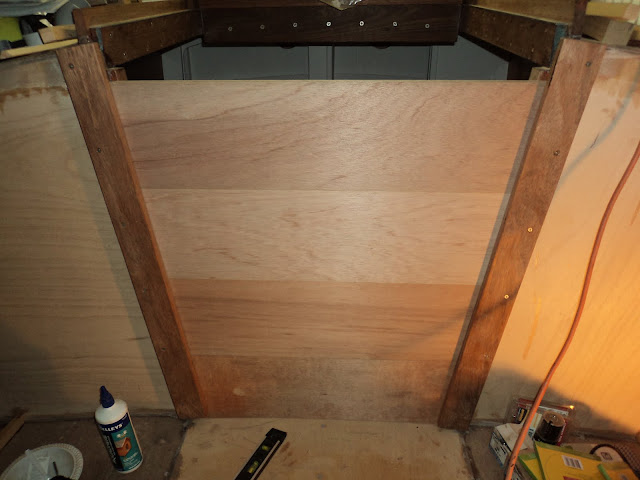 Once I was happy, they were epoxied to another layer using the left over lead ingots (and my son's hand cast) to hold them together: 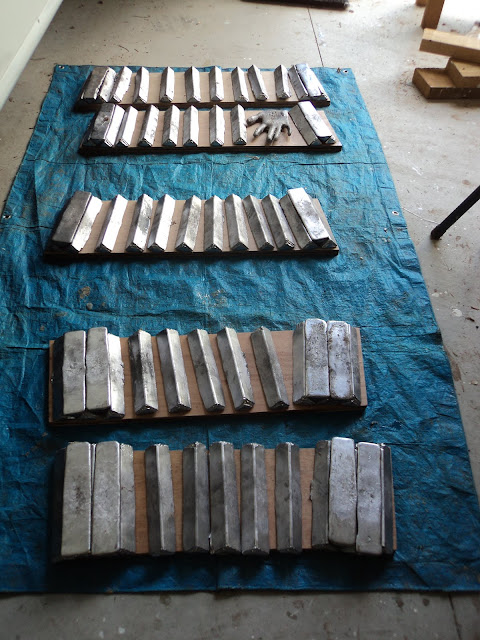 With the two layers in place, I cut strips of wood for the bottom of each board which would overlap the join to divert water: 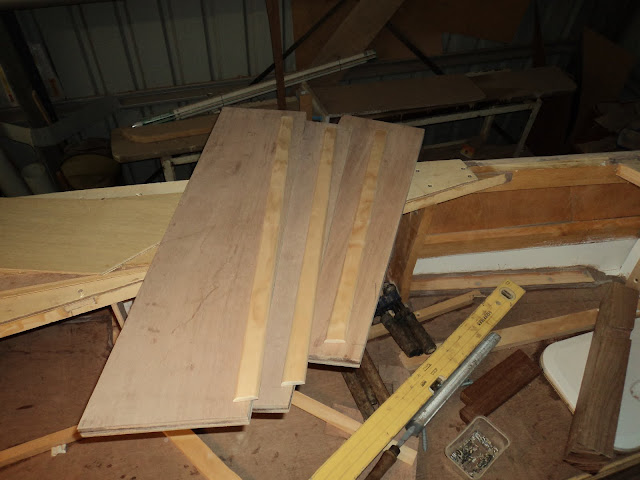 And glued, nailed them on covering the nail holes.  Don't worry, they got a layer of epoxy on the outside as well later. 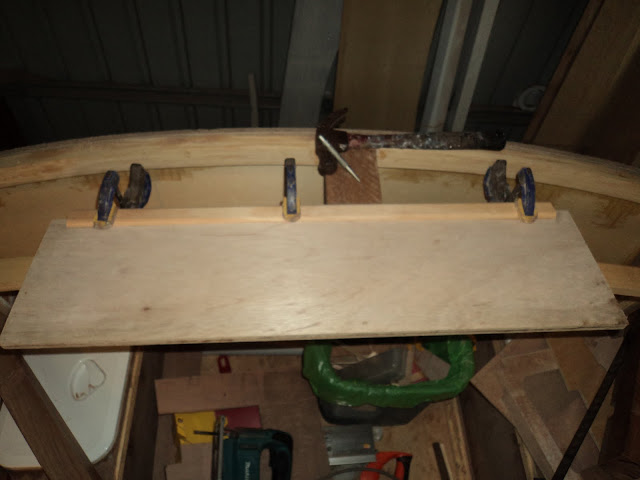 This shot shows the inside on the left (note the amount the board below is covered) and outside of a washboard: 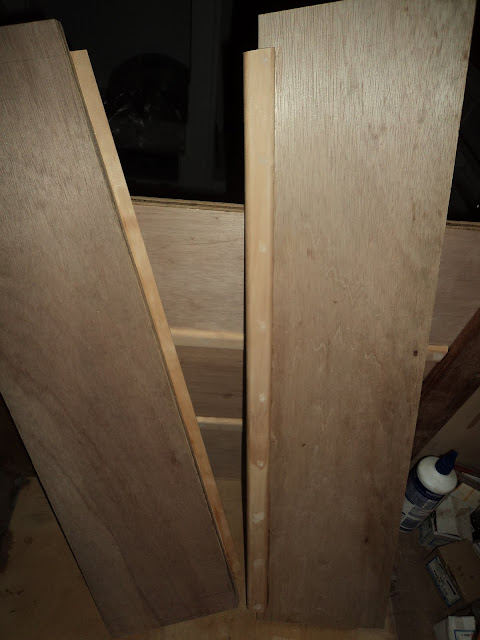 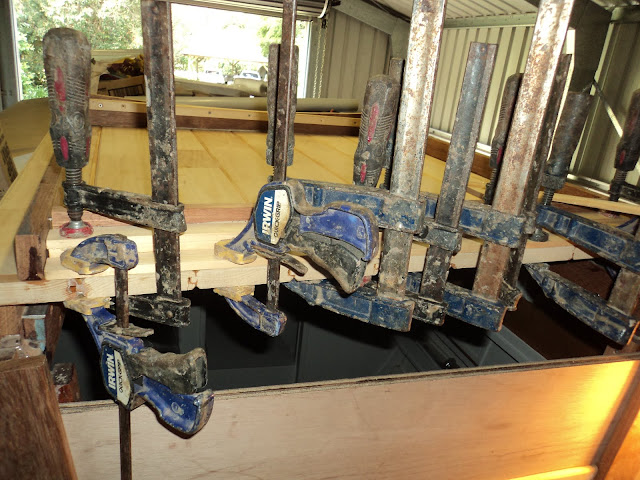 Below shows the hatch as you see it from the cockpit.  This is the starboard side.  On the very outside is a cover to stop water and at the front the handle to open and close it.  Inside on the right is the outside of hatch support which meets the deck with an epoxy fillet, glued and screwed inside it is the hatch runner with an aluminium piece to prevent wear.  Under the screw you can see the vertical hatch side which forms the runner for the hatch.  The ply on the bottom left is the top washboard, notched to allow the runner to come out over it and just under the hatch which slides over the top. 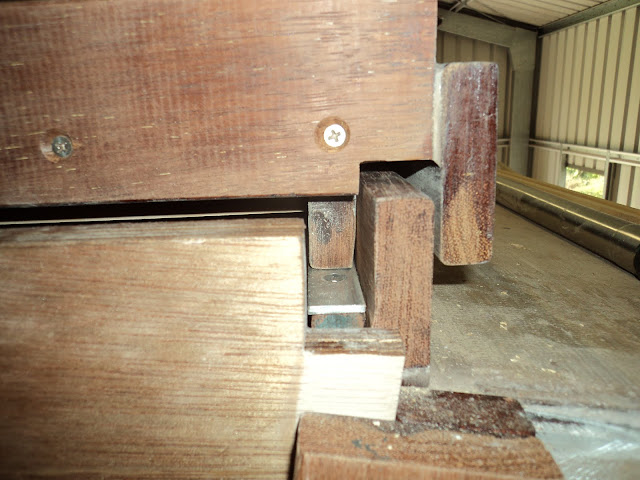 This is the hatch from the side, I will make a solid hatch cover (some call it a turtle??) for the hatch to slide back into shortly. 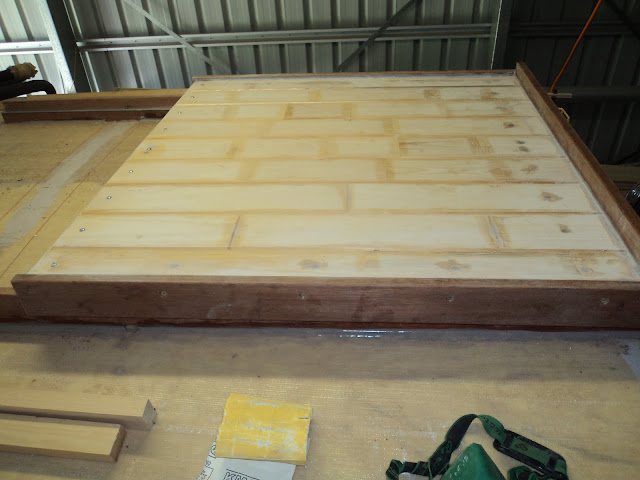 And a distance shot of the washboards and hatch closed.  The outside will be painted, the inside I am going to leave as just epoxy as a feature. 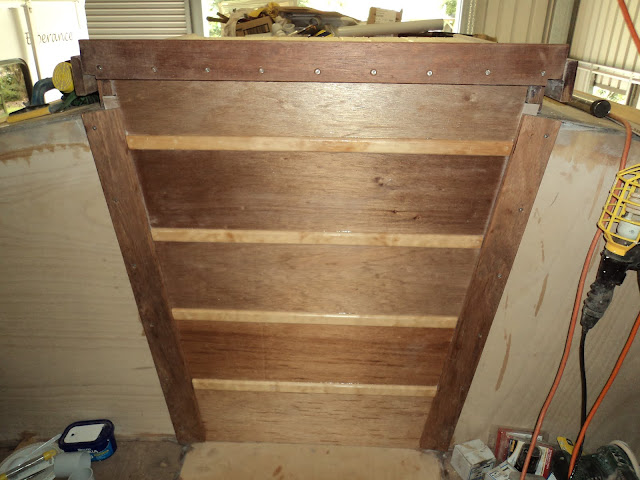