This is two calendar months, but not two months work.

Happy New Year to all (yes, I realise it was a while ago) but the Christmas/New Year break and school holidays has meant that shed progress has been slow.  Did manage to email Rik (I've added his new blog to the side) who has just purchased plans for Sundowner #26.  Looking forward to watching how his progresses, hopefully he will not overtake me.

We melted the left over lead from the pot and cast some 1.5kg ingots with angle iron moulds: 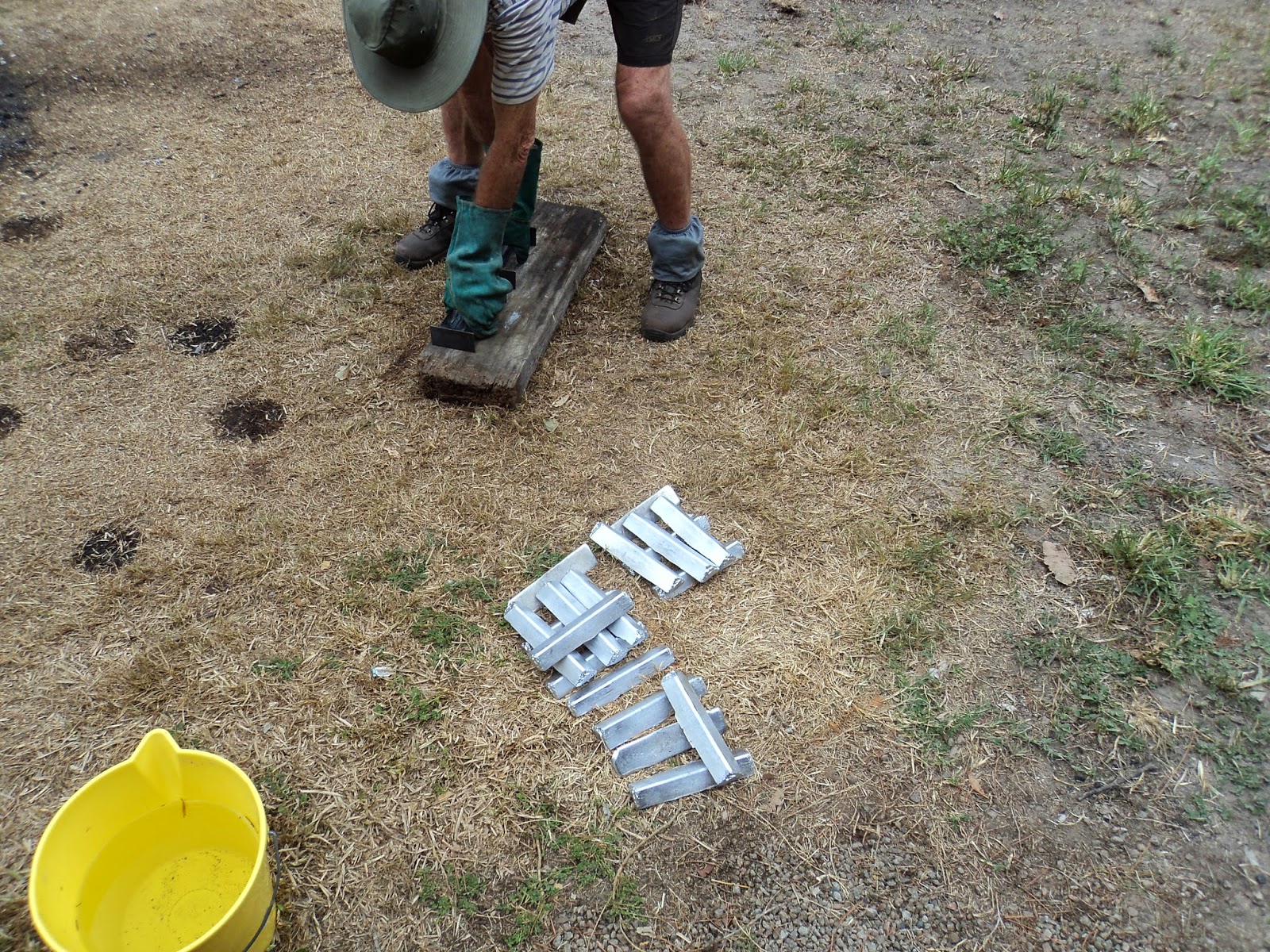 And my son cast a hand print of course, using the left over clay from blocking the end of the melting pot: 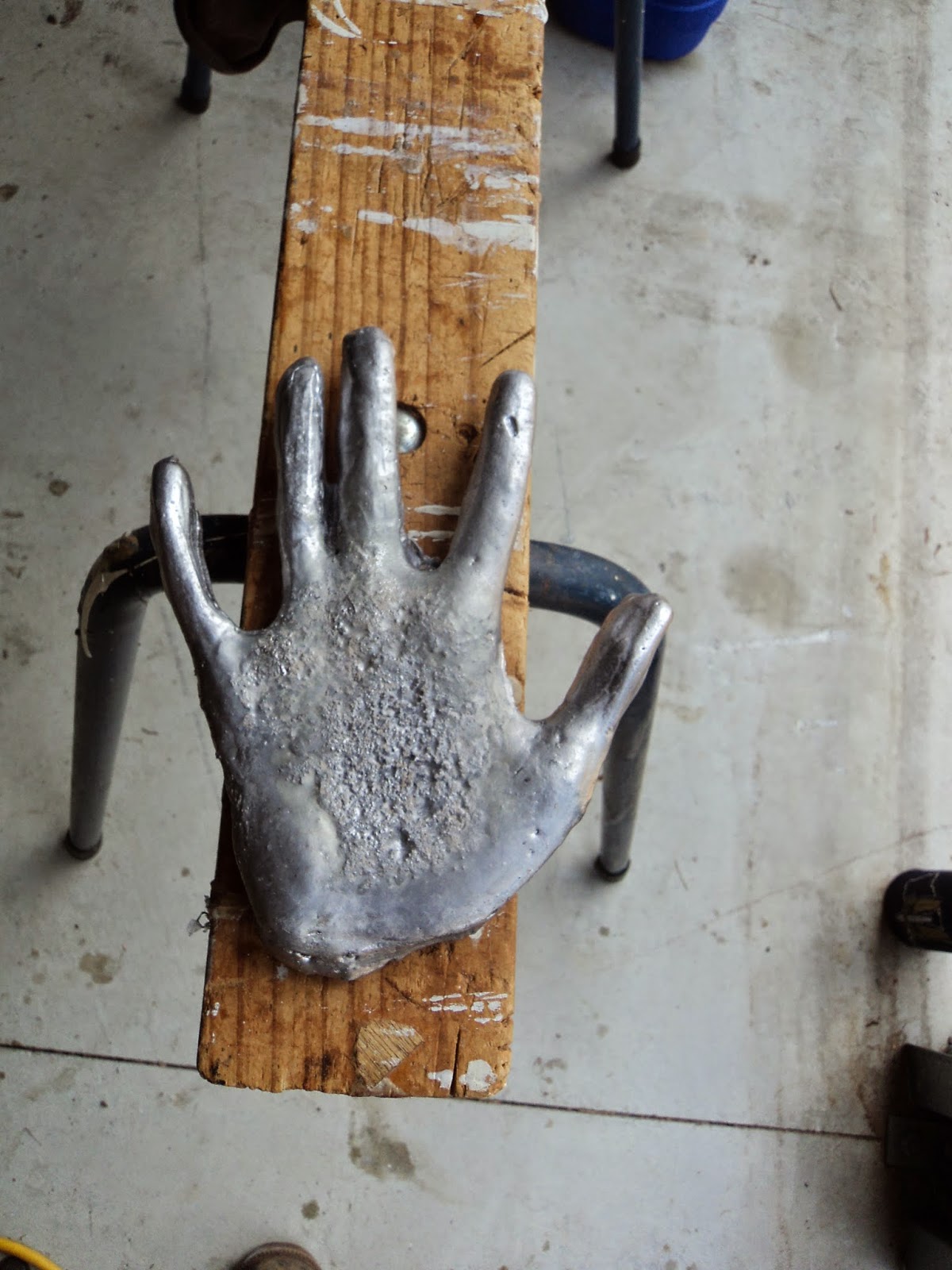 First task on the continuation of the keel was to get it out of the mould.  Sounds easy but it takes a while to achieve!

All the screws, side supports and threaded rod at the top were removed and the ply gently prised off. Not too bad, if I do say so myself.  No obvious giant holes or air pockets: 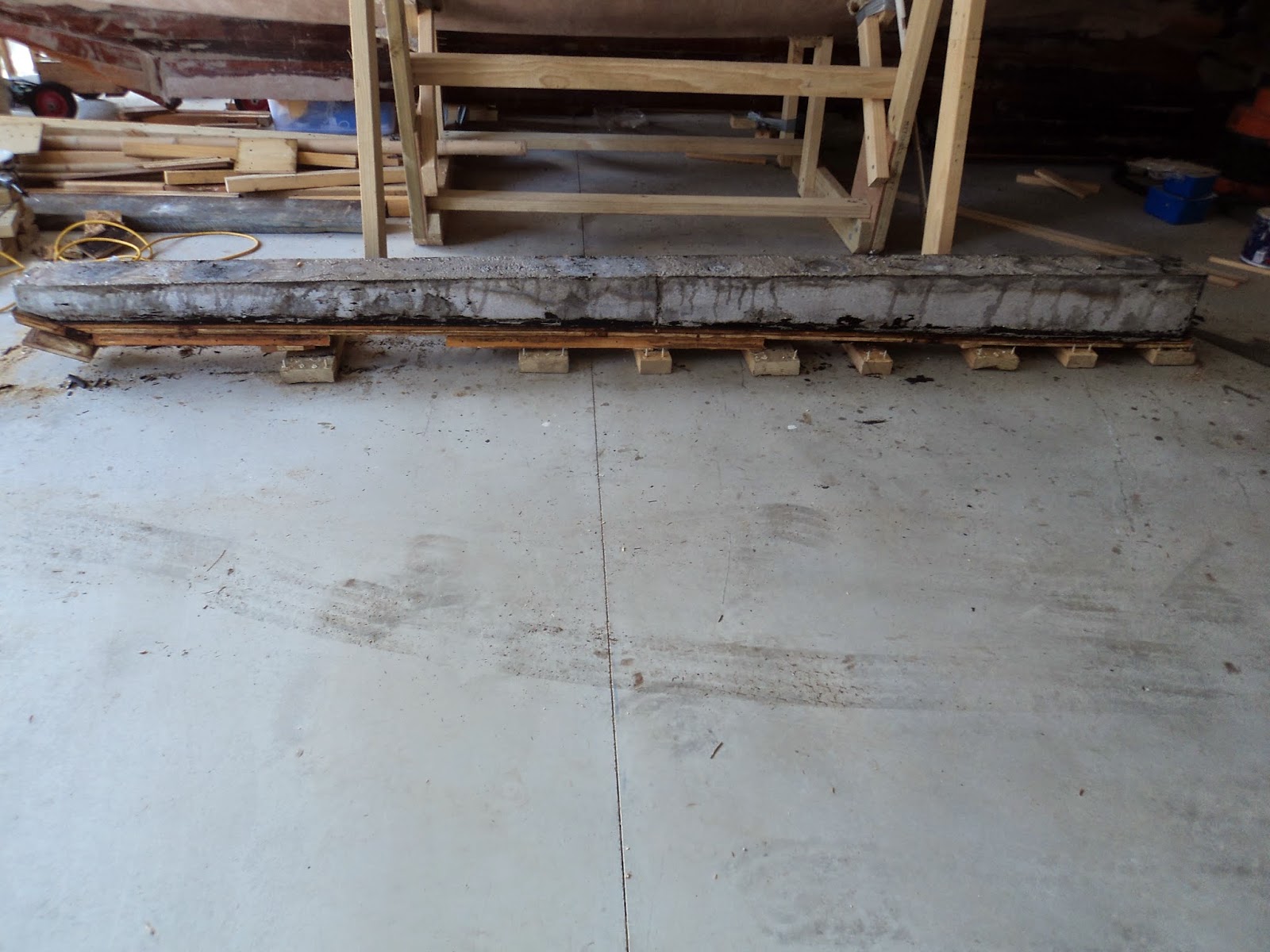 Below is a close up of the front end with the slope down to match the keel wood (see in the background), and a more gentle slope towards the aft end on the bottom: 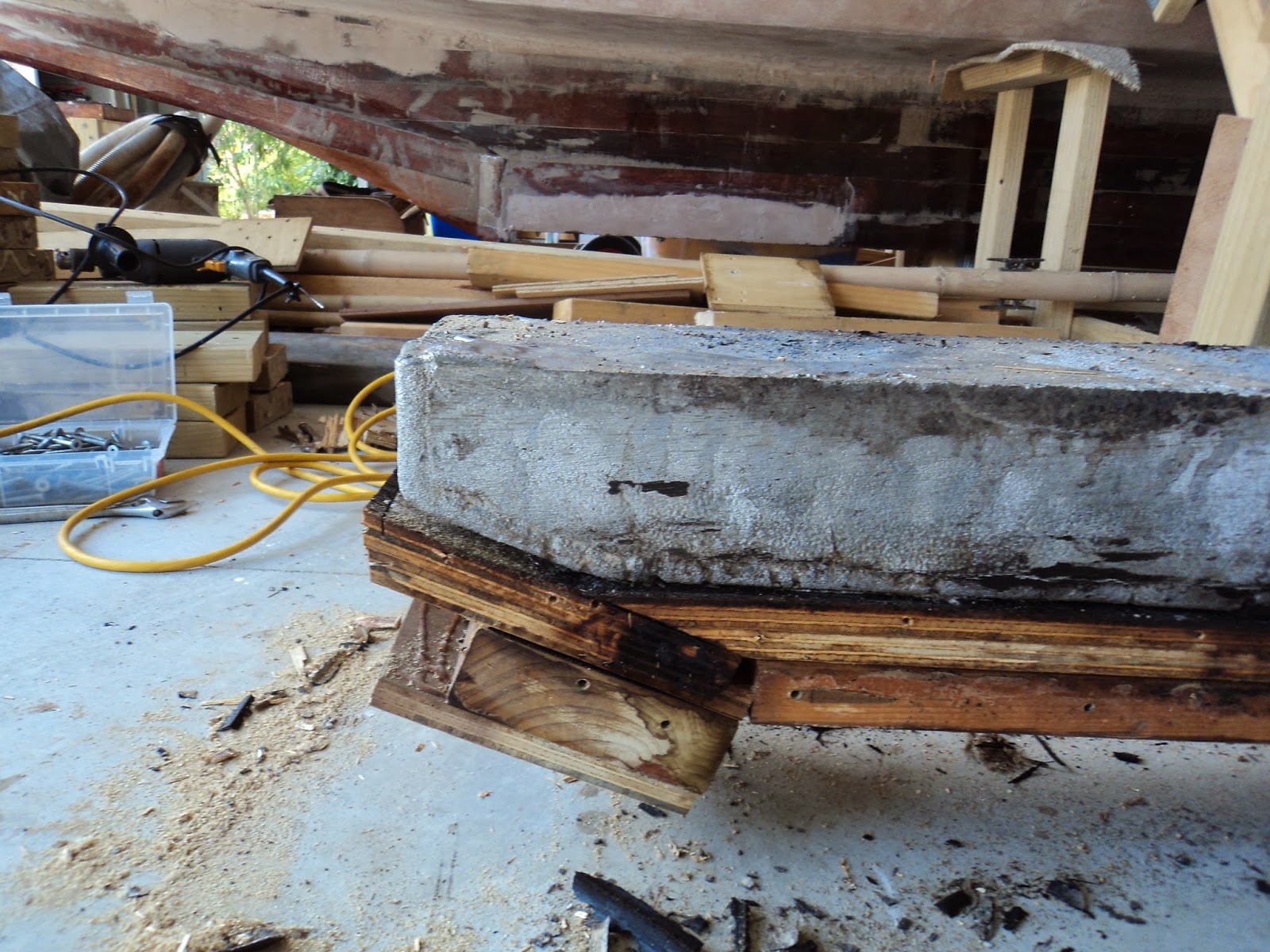 Then I positioned pieces of wood level along the top to remove the excess lead and level it.  You can see the router screwed to a piece of ply to ensure it stayed on the guides.: 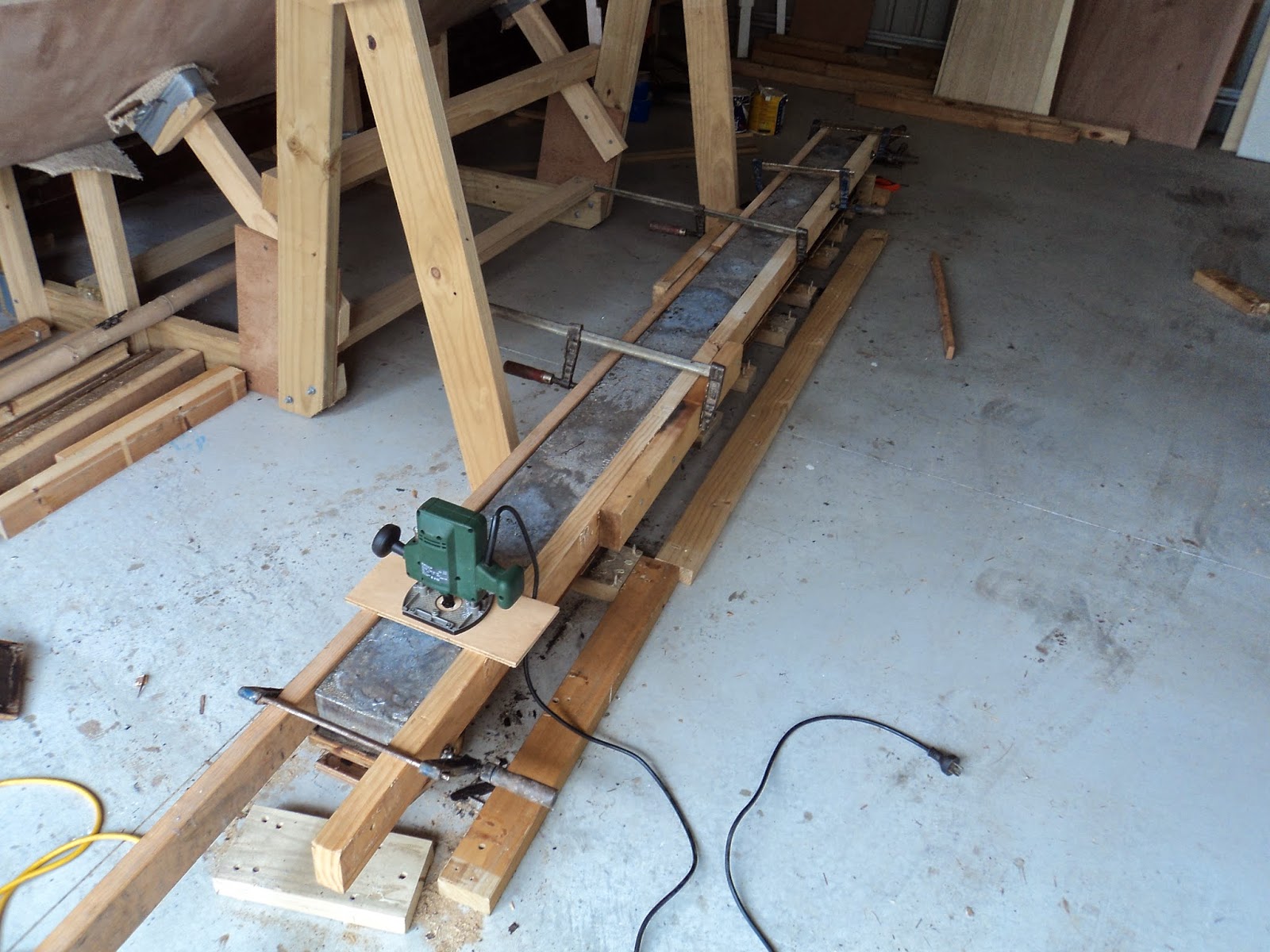 And away I went.  Secret is to go shallow, not too deep.  Up, adjust the bit down, back, adjust down, etc etc: 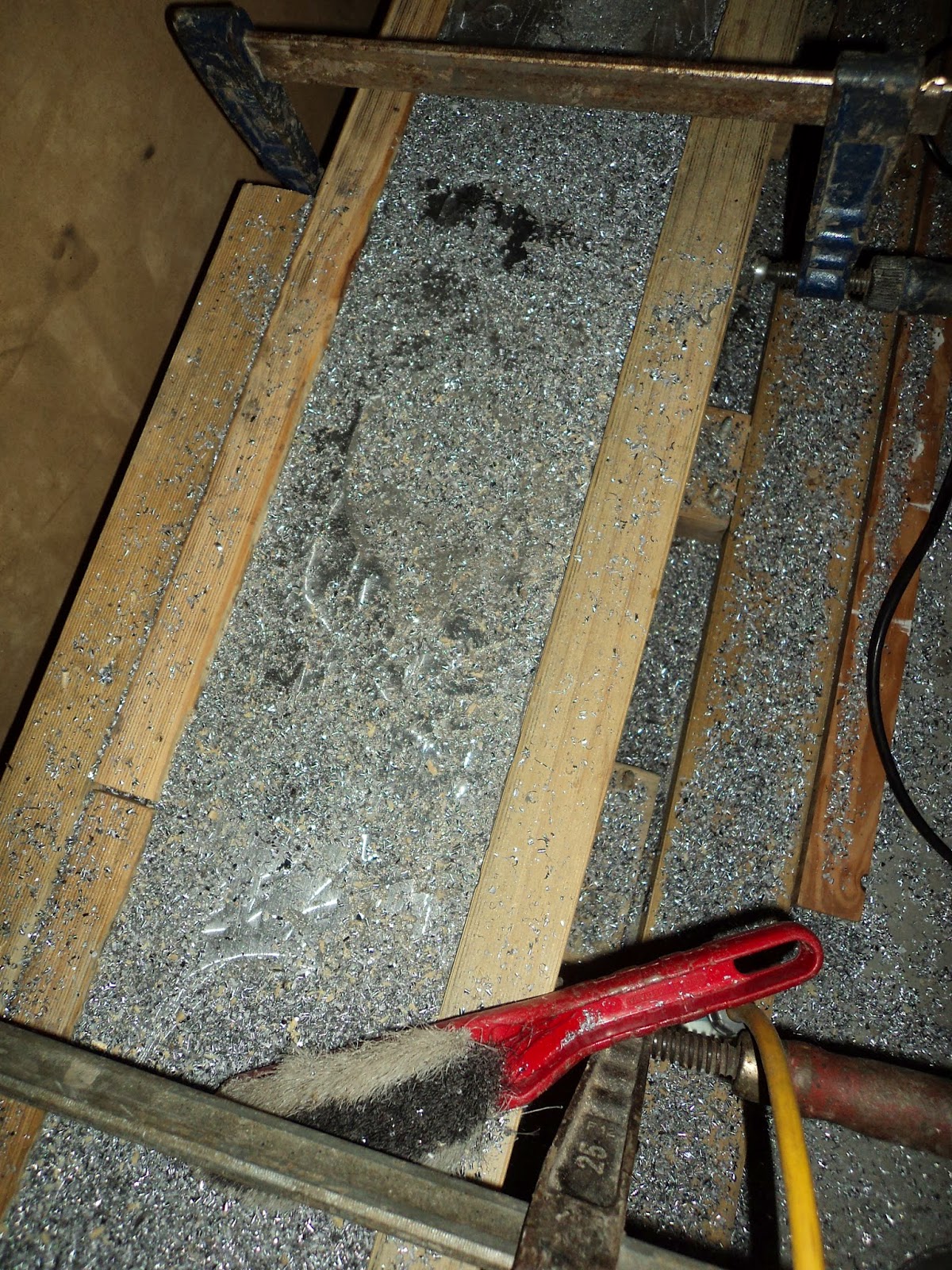 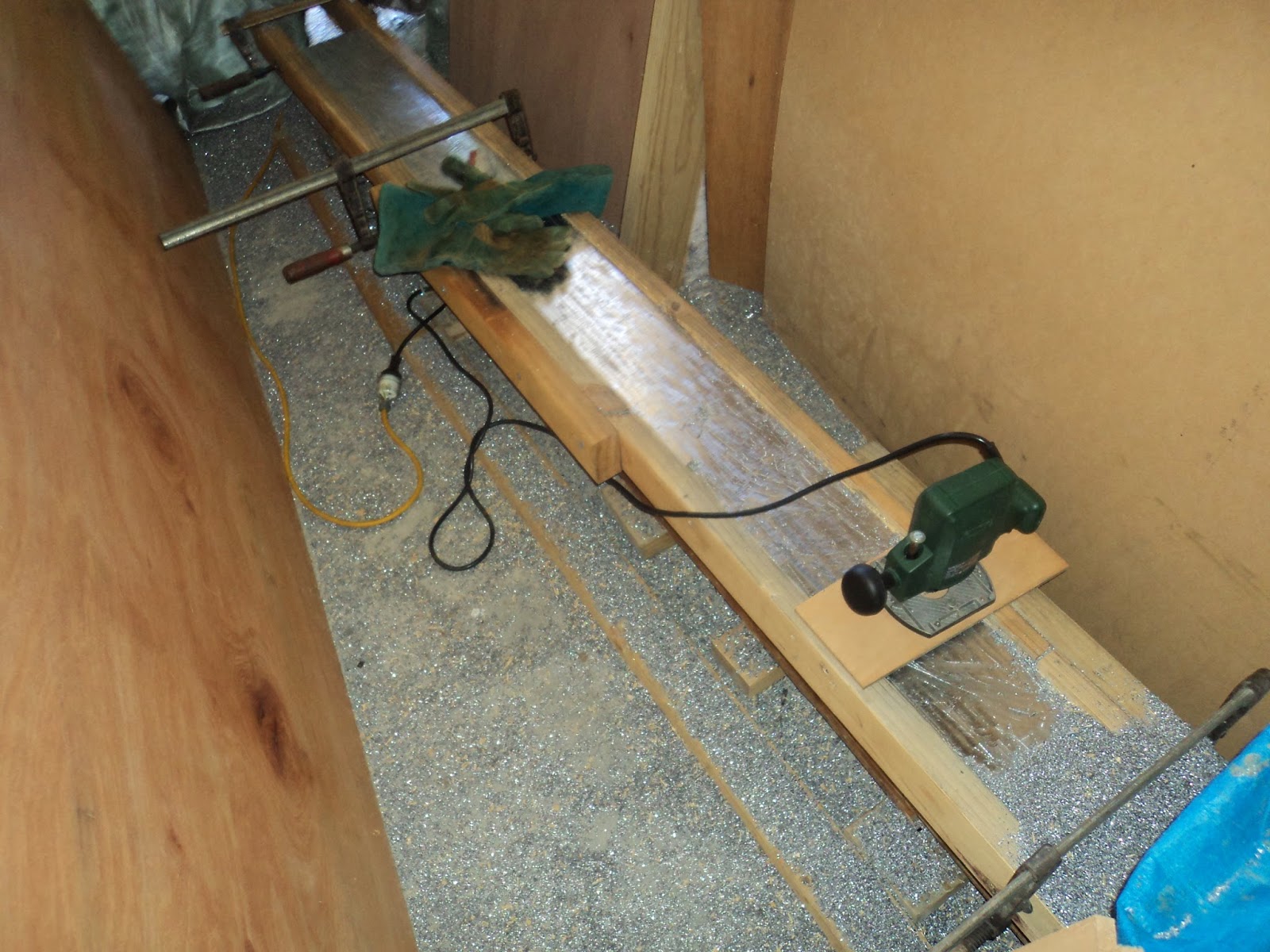 Until I could not go down any lower on the router: 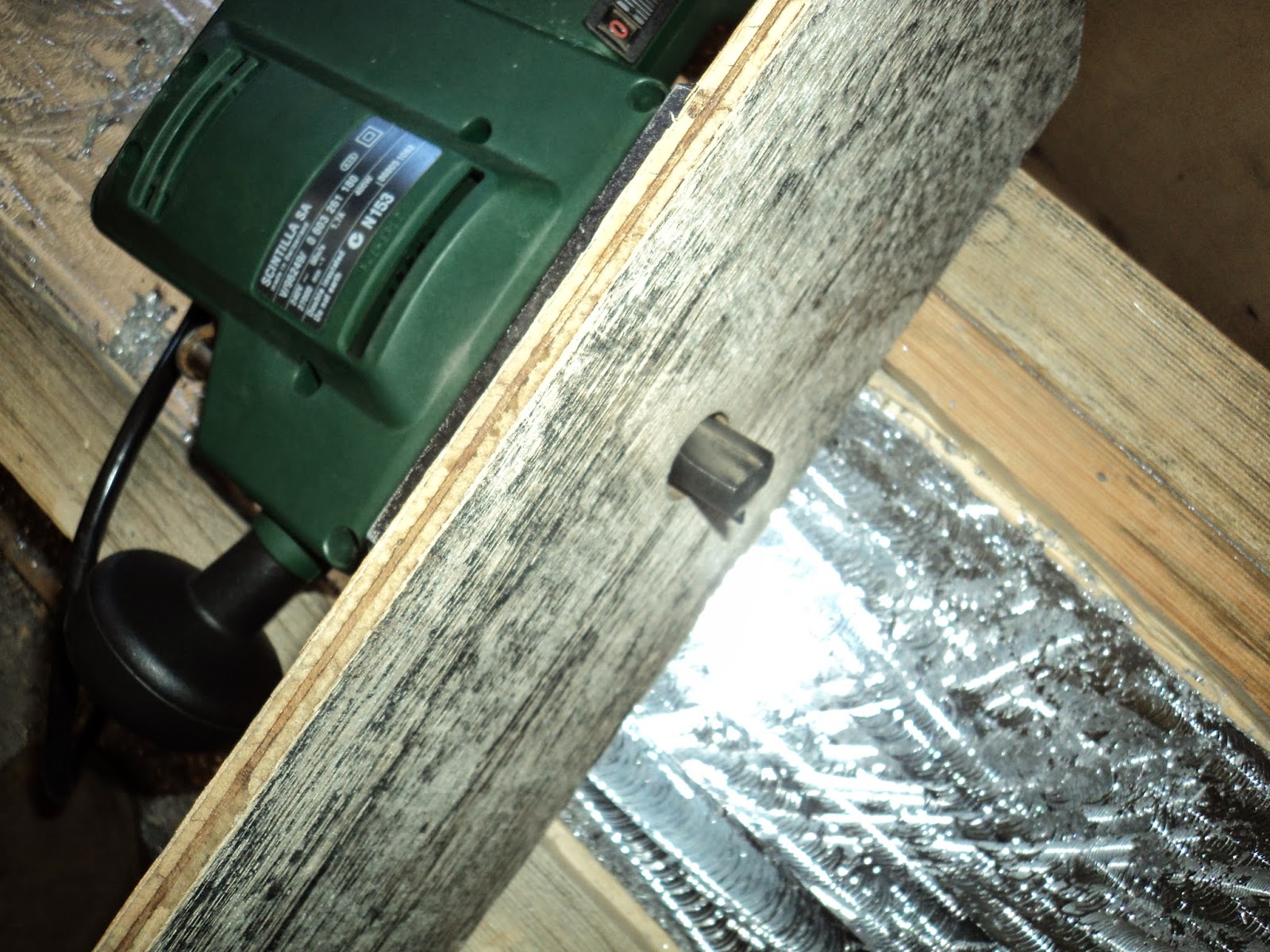 The final top surface, it looks rough but the marks are quite smooth: 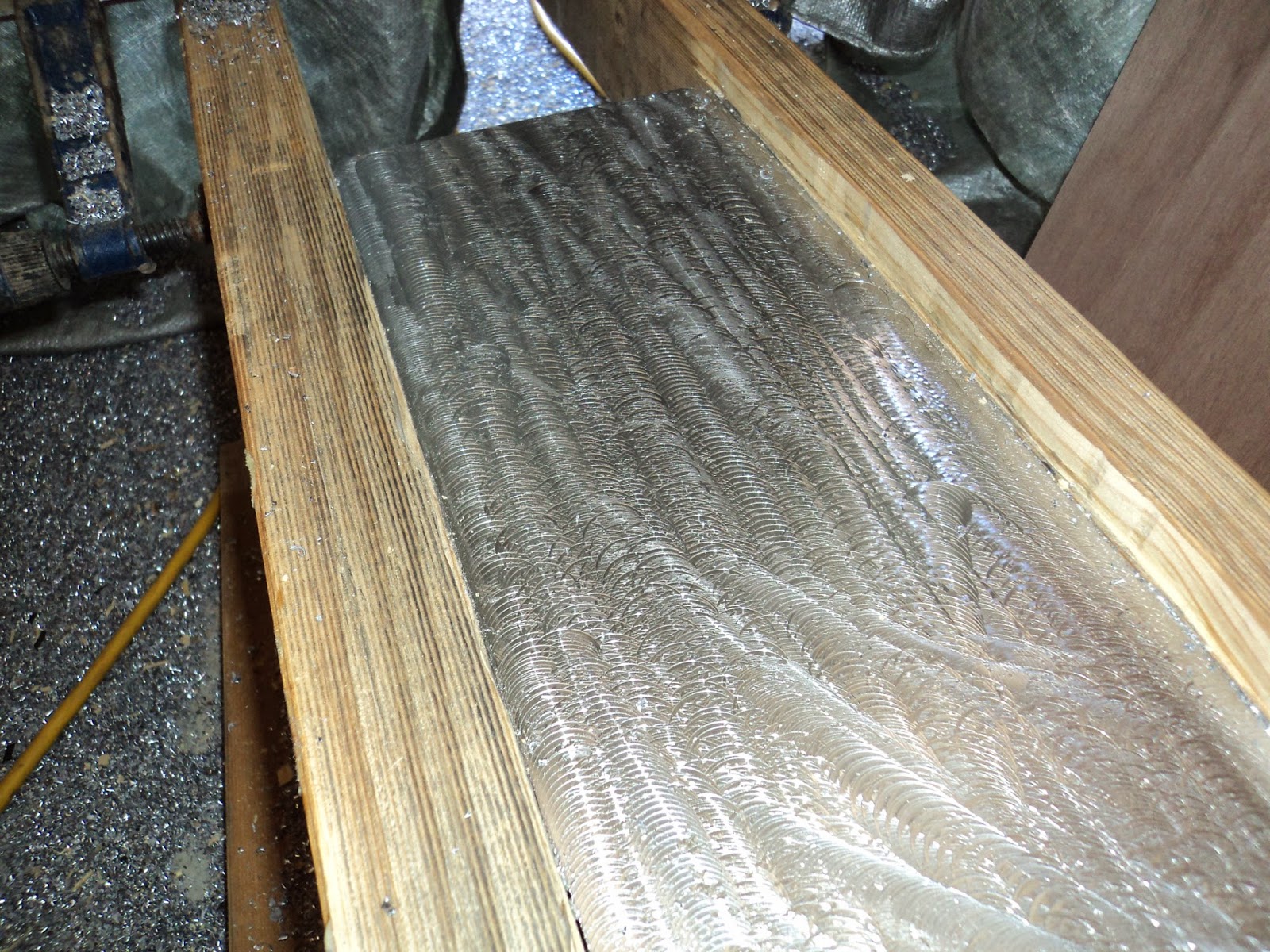 I still had another 10mm down, but I had a momentary flash of common sense.  If I flipped it upside down, I could just do the aft 50cm or so parallel with the top surface to get to the required 180mm. The slope up to the front would then continue as cast.  Happy days, no where near as much work as it would have been.  Down side is I dropped it at one stage when removing the supports underneath, you will see the consequences later on.

Below is how we rolled it.  Clamp two long bars with ply between them and the lead, then use the bars to tilt and lower onto supports.  Weight on the end of the bar was about the same as a bag of groceries, hardly anything at all.  Another lesson learnt, I cannot claim I thought of it though.  Dad again. 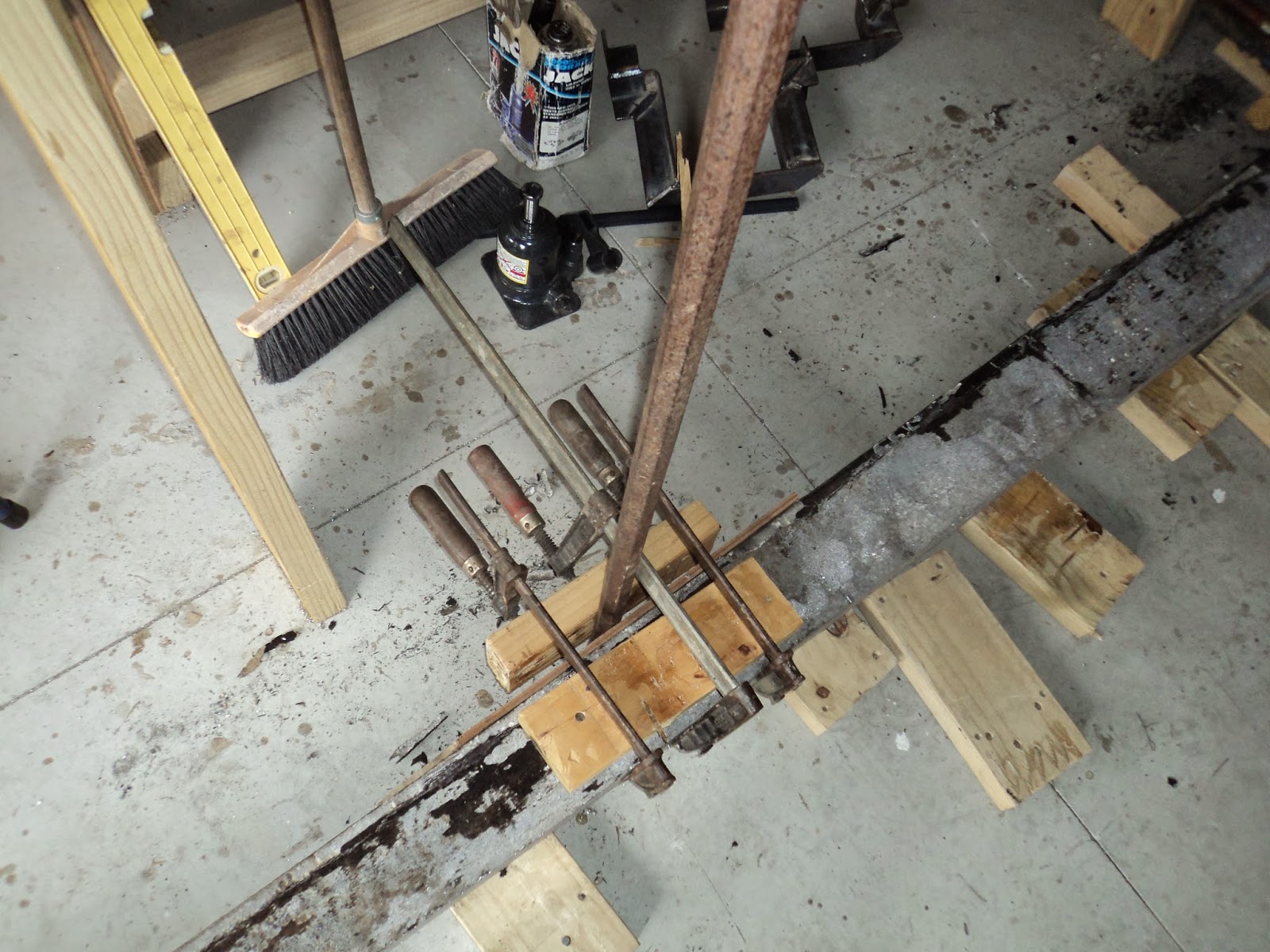 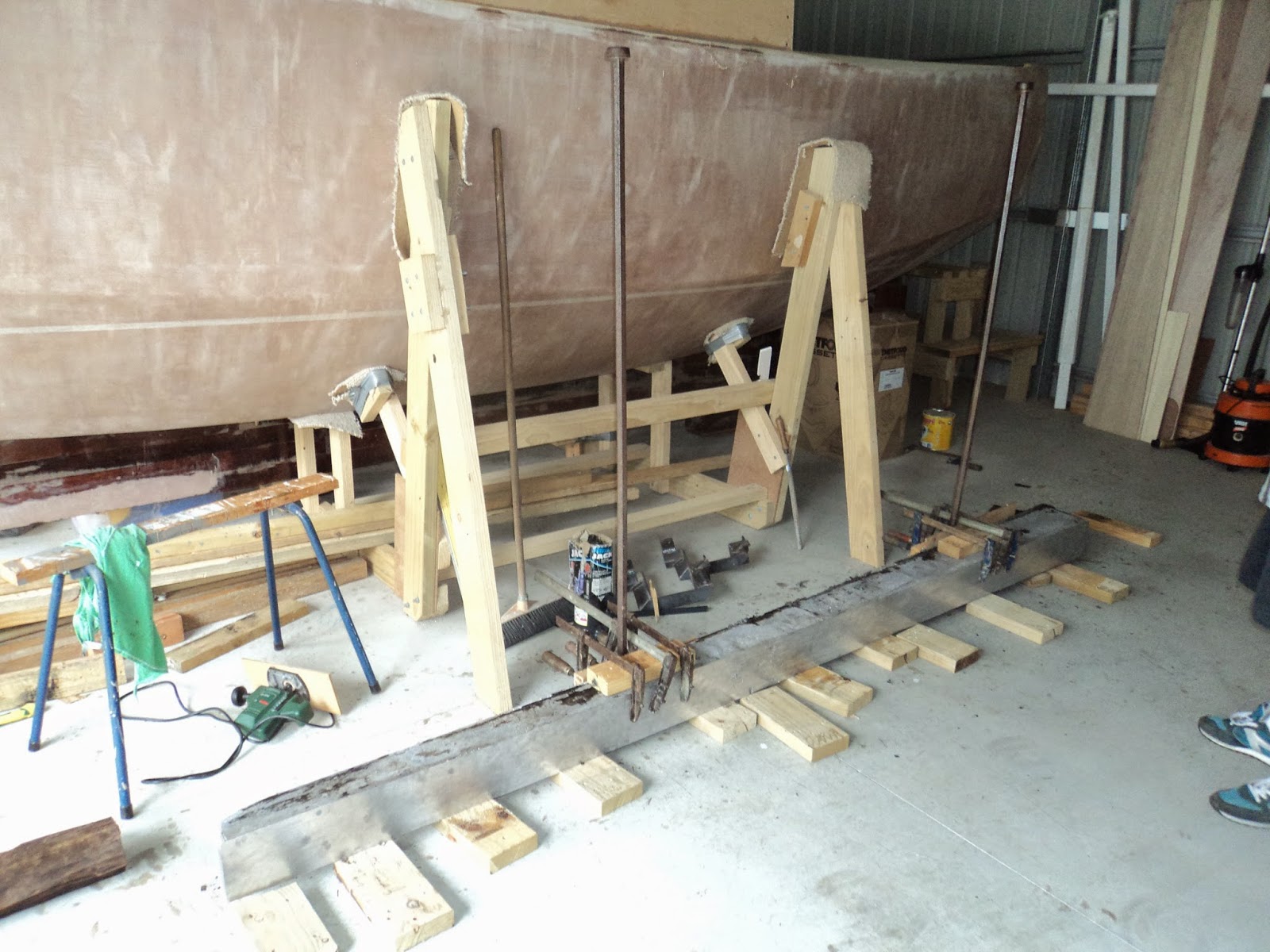 Then I took off the base of the mould.  Obviously some charring occurred, but not as much as I expected.  It was fairly superficial in depth on the ply. 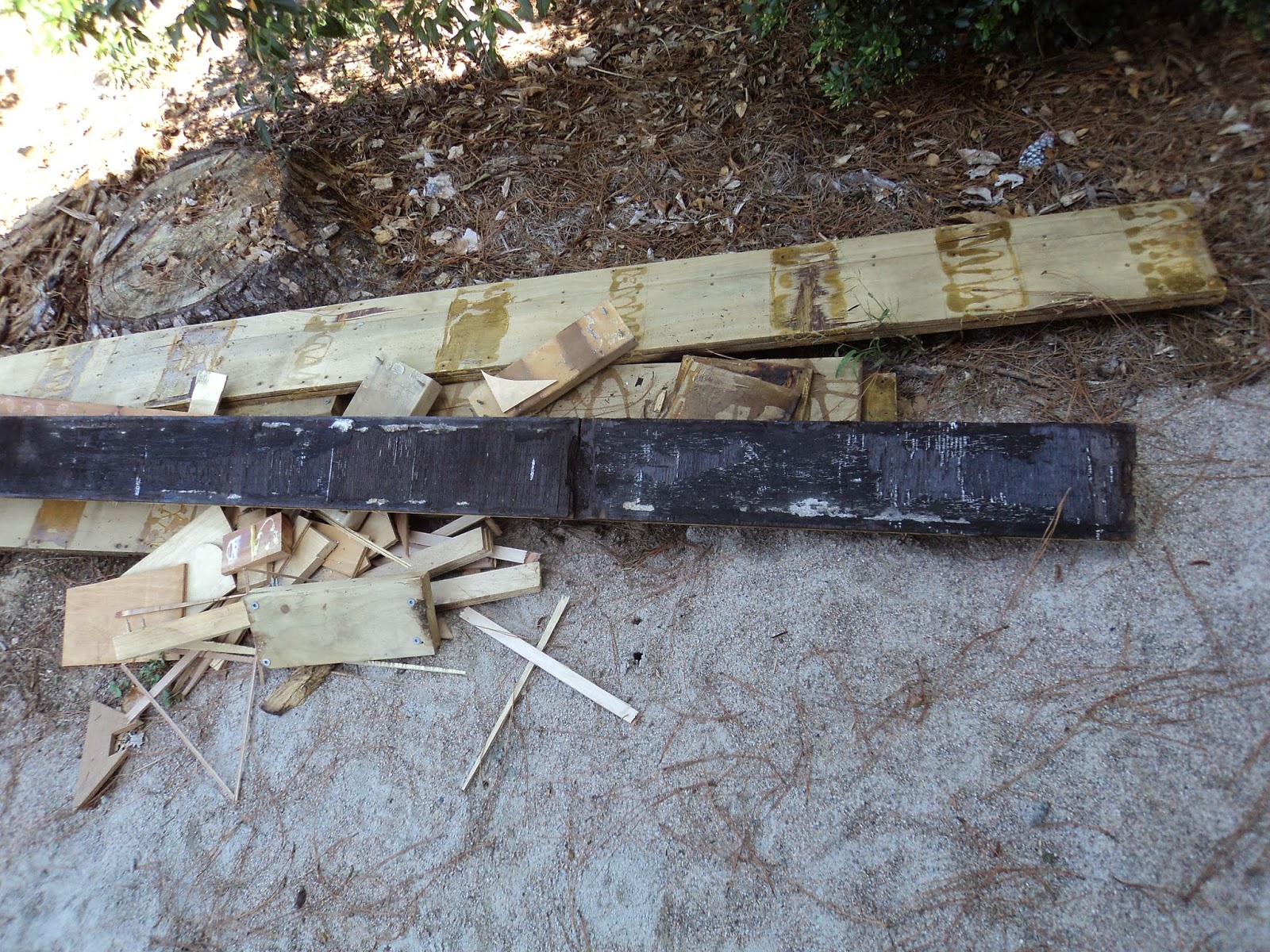 Below shows the join in the bottom ply which was covered with exhaust putty and failed a bit.  It didn't leak lead out of the mould, just formed a bit of a ball which mostly broke off by hand from the main part of the lead.  The bit that stayed on was small enough to be gently ground off smoothish prior to a coat of epoxy on the bottom. 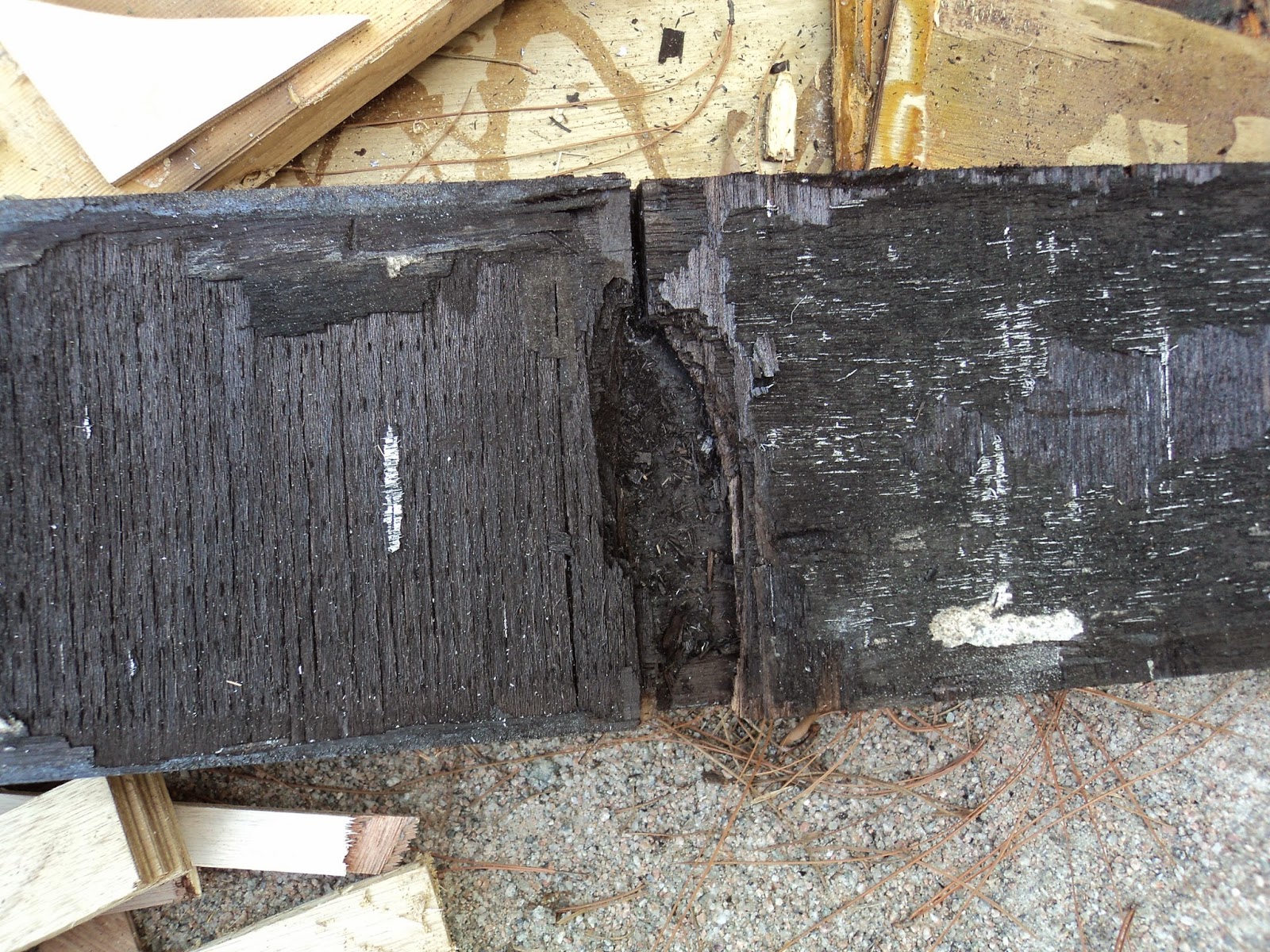 This shows the result of the stuff up.  While I was moving the keel onto blocks earlier I dropped it, causing the front to bend down.  This has been flipped back over ready to position.  If you look below you can see where it starts to bend between the first and second blocks from the left. 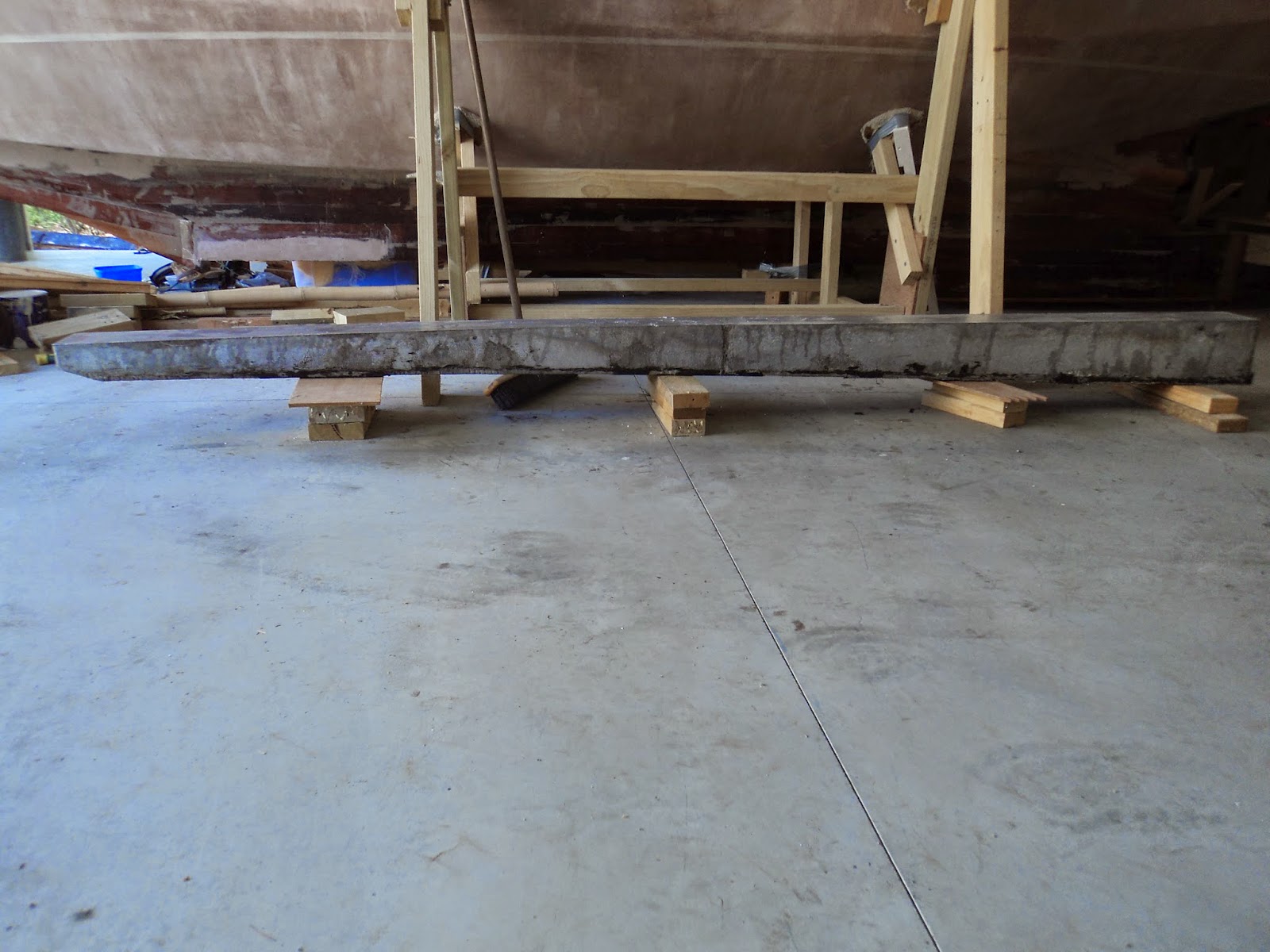 The Tradesman came through again with moving and lifting.  We used the small stainless steel rods from the roll over and move again.  Once inside we positioned two brackets that he had welded up with four different lifting heights to suit four small jacks (three hydraulic - one he had from earlier, and two from current vehicles and one from my vehicle).  It's good to have a handy father!  Below you can see us using bars to lift it into position prior to jacking.

You can just make out his clever solution to the bend at the front you can see.  If you look back along the lead keel just above the metal triangle of one of the lifting brackets and further back you will see 10mm thick metal plate.  We marked where the bend was, positioned the plates behind that point evenly then jacked up the rear of the lead. Once it was against the plates, we used a hydraulic jack to force up the front upwards to get rid of the bend.  Then we lowered it and checked, problem solved!. 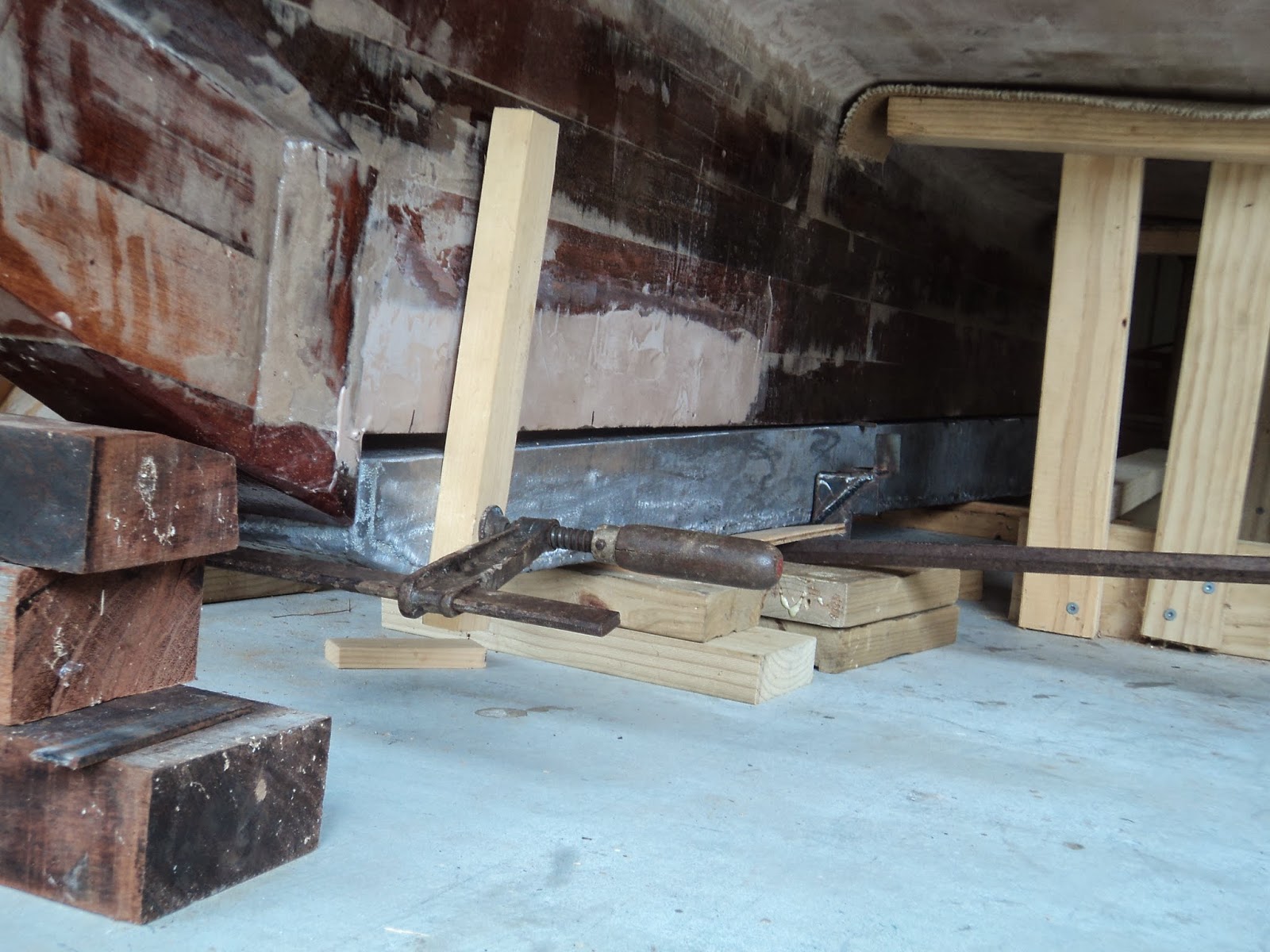 Below is from the rear of the lead showing the lifting bracket and the metal plate positioned between the lead and the wood keel.  You can just make out that I have put a smooth coat of epoxy on this side of the lead.  I didn't do it all because I wasn't sure if the bending would crack the epoxy.  It doesn't appear to have but it is coming out again anyway as you will see. 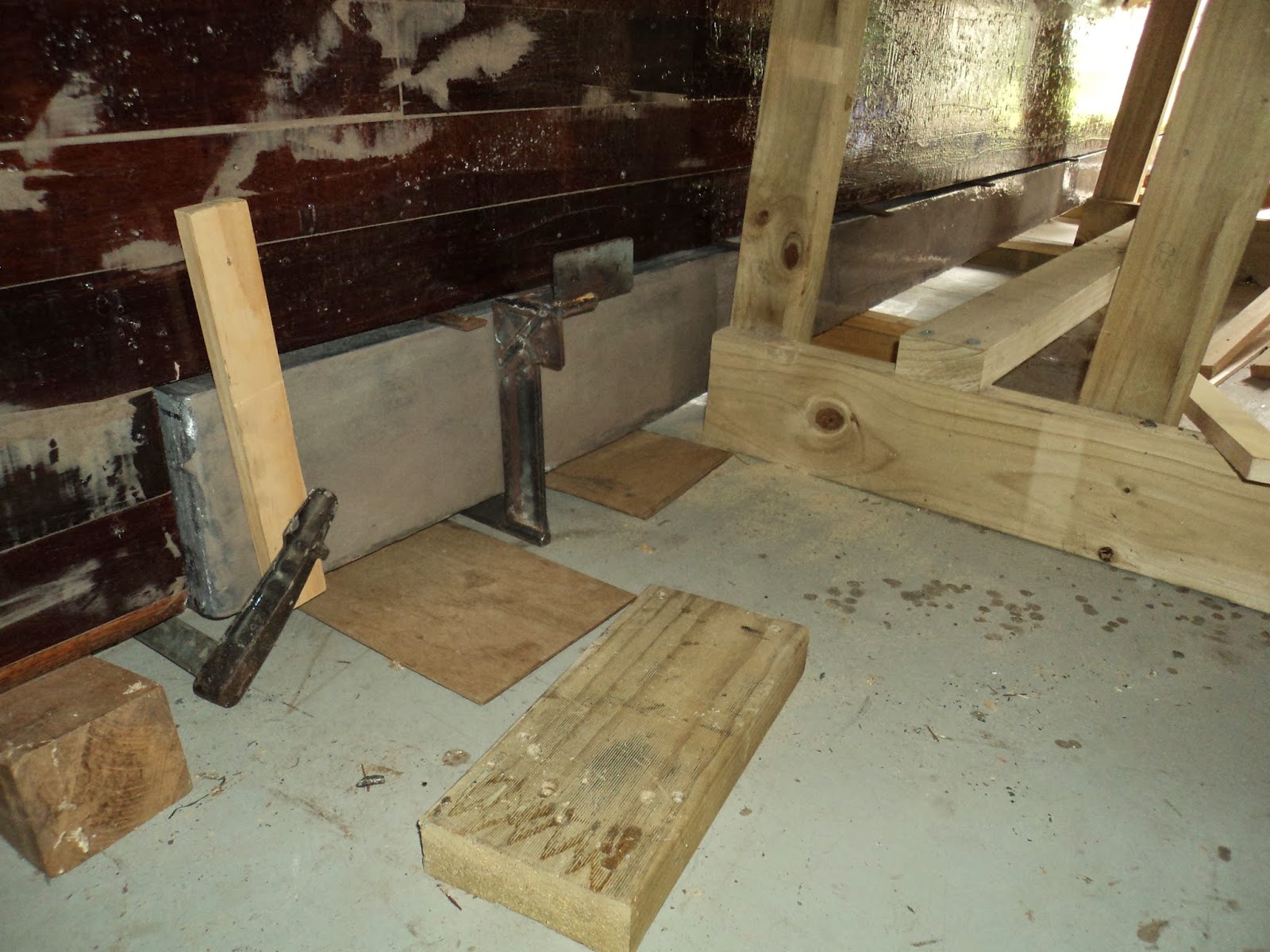 Once we had jacket up the keel again we noted there was still some gap in the middle.  Either I routed a bit too much off in the middle some how or just as likely when I built the wooden keel the Kwila had a bit of a bend in it.  I will add a bit of extra epoxy on the top surface and there is a thick layer of felt and roofing tar to go between the wood and lead anyway which will fill it.

Then it was inside to drill the first 25-30mm of each keel bolt hole from inside.  This allows us to mark the exact location and angle we have come down through the wood keel at (we tried to get close to vertical but didn't always succeed).  Below shows the drill bit with metal rod extension he welded on. 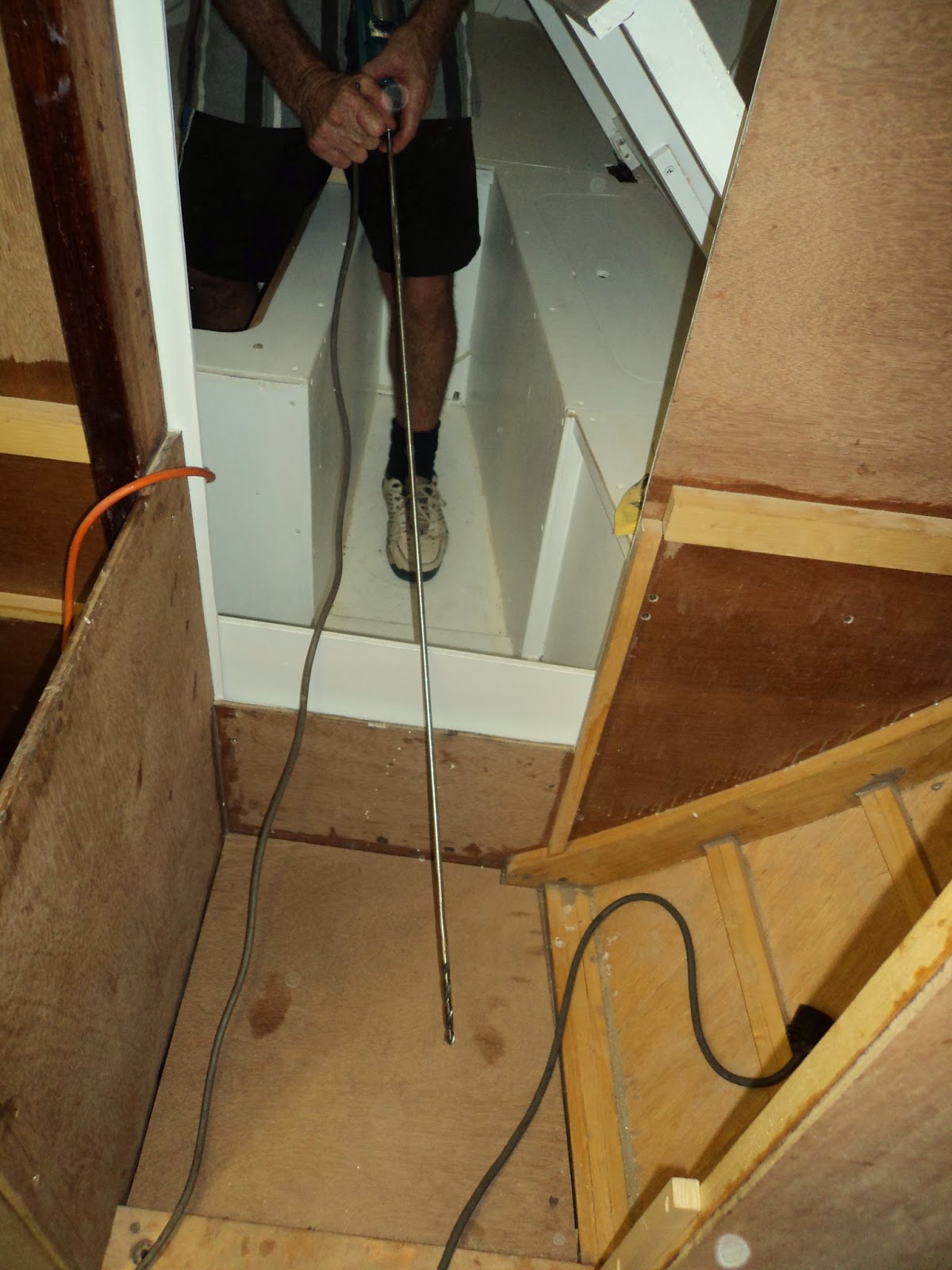 And continuing the single bolt hole at frame 5 into the lead.  We took it very slowly catching the lead in the grooves of the bit and removing them.  There are holes down through the hardwood cross floors and wood keel at frames:
That is a total of 8 10mm silicon bronze bolts to hold the lead on. Once we had marked them all we moved the lead back out again.  We found it quicker this time using a 40cm piece of wood and three rollers each end rather than the lead down on the rollers.  Easier to take the weight with a bar to reposition rollers or wood.  Below is the four holes from frames 7 and 8: 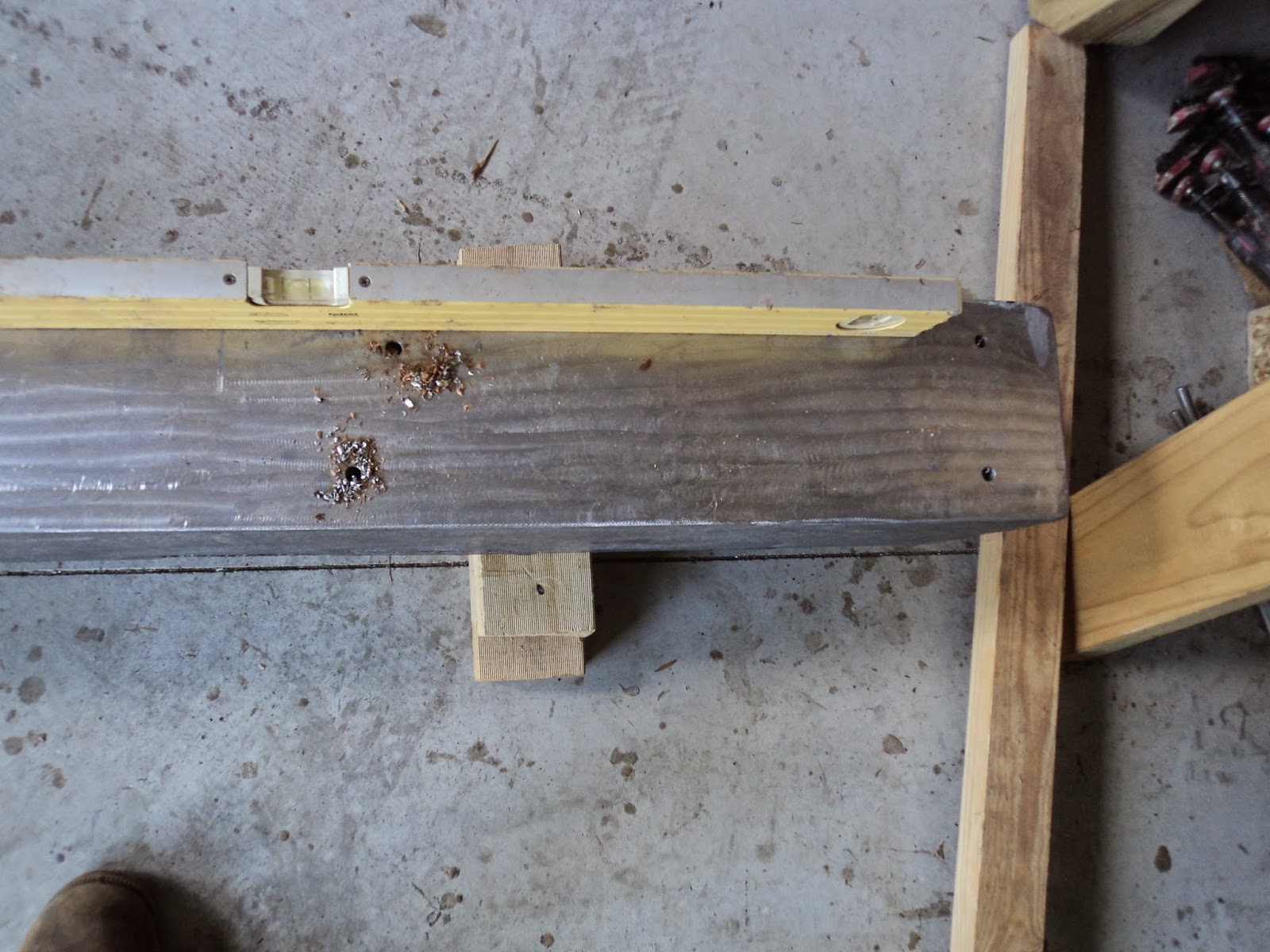 And a shot looking down the length: 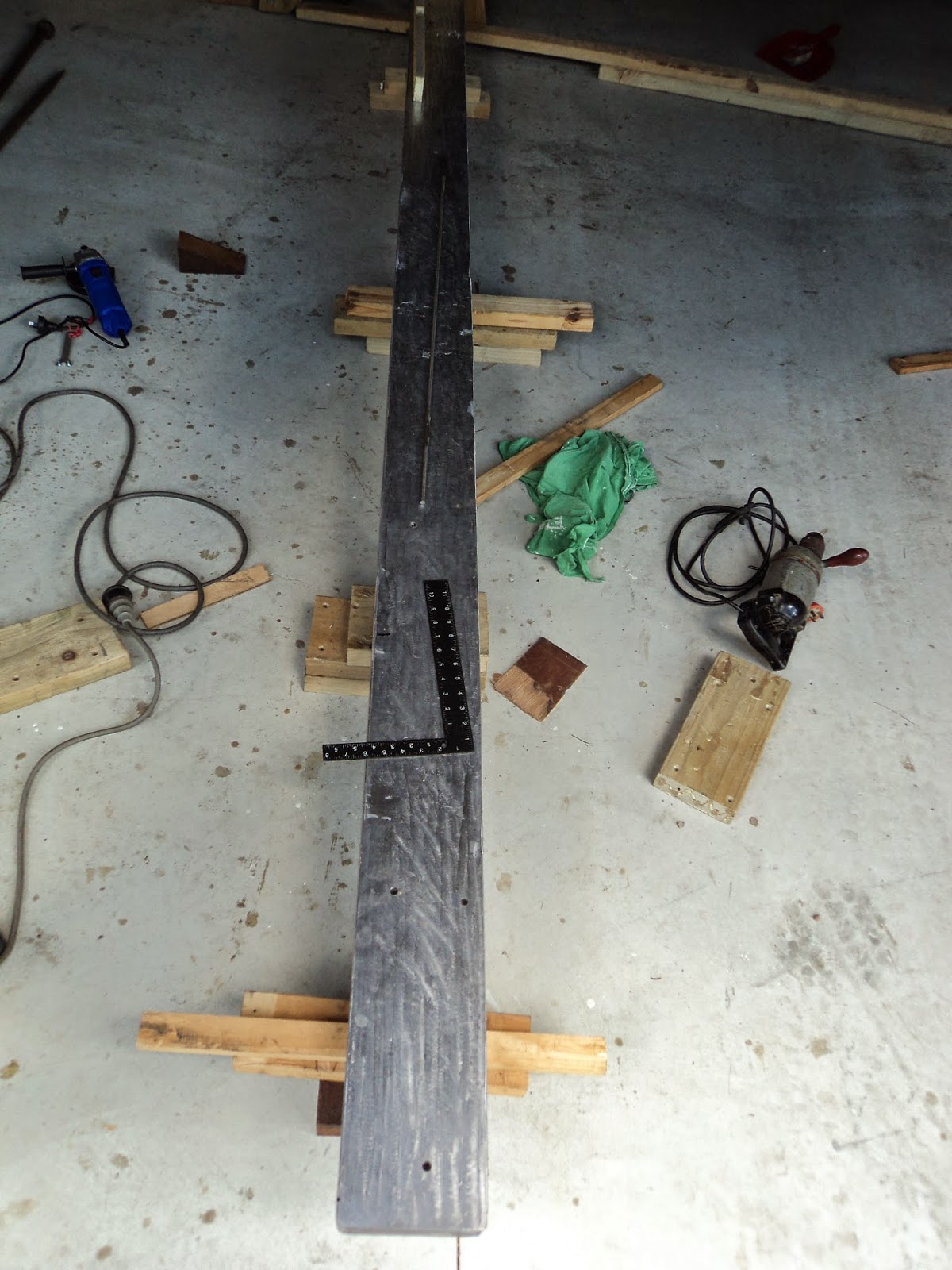 Once it was roughly levelled we carefully used shorter drills to continue the angled holes down through the lead.  Nice and slow, with silicon spray and WD40 as lubricant.  Seemed to work well, we did snap one extension piece off a drill but not through too much force.  Easily re-welded (according to Dad, not me!).